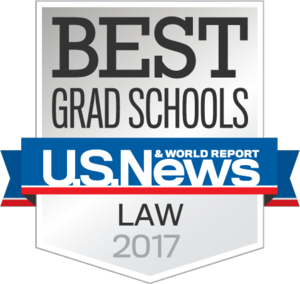 Continuing a TaxProf Blog tradition (see links below for 2009-2016), here is the full list of the 196 law schools ranked by academic peer reputation, as well as their overall rank, in the new 2017 U.S. News Law School Rankings (methodology here):

According to a Kaplan survey of over 1,000 pre-law students, 73% say U.S. News & World Report’s law school rankings will be an important factor in their decision of where to apply and enroll.* But most law school admissions officers think rankings should play a less important role. A separate Kaplan survey of 120 law schools across the United States shows that only 40% think U.S. News & World Report’s rankings should be an important factor in future applicants’ decision making processes.** In fact, over half (52%) of admissions officers agree with the statement, “I think it would be in everyone's interests - prospective students, current students, alumni and school administrators - if there were no rankings lists at all.” In contrast, only 31% of pre-law students share the view that the rankings should be done away with.

I felt it in my bones. My Oprah inner voice told me so. My school hit the mother load. It improved by three 10 ranks!!! My destiny is that new Hyundai Excel with a vinyl roof and opera window.