Pasquale:  The Unity Of Faculty Research, Service, And Teaching In Legal Education

Most non-profit law schools generate public goods of enormous value: important research, service to disadvantaged communities, and instruction that both educates students about present legal practice and encourages them to improve it. Each of these missions informs and enriches the others. However, technocratic management practices menace law schools’ traditional missions of balancing theory and practice, advocacy and scholarly reflection, study of and service to communities. This article defends the unity and complementarity of law schools’ research, service, and teaching roles. (For those short on time, the chart on pages 45-46 encapsulates the conflicting critiques of law schools which this article responds to.) 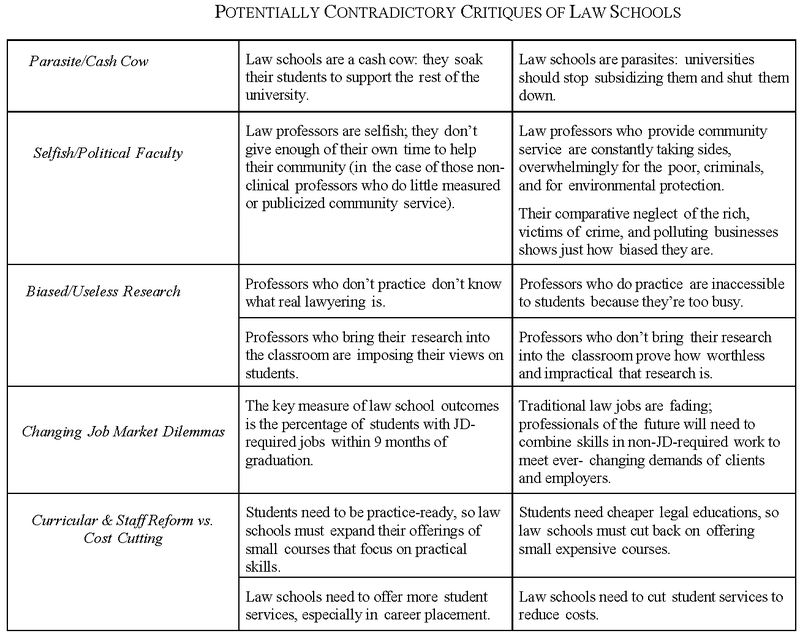 I say only that at least one of Pasquale's "contradictions" is solved by chronology. The complaints of 2010 are not the complaints of 2016. As for whether law schools should subsidize universities in the future, I'd say no. As per the New York Times at http://www.nytimes.com/2011/07/17/business/law-school-economics-job-market-weakens-tuition-rises.html?_r=0, law school tuition growth FAR outpaced undergrad tuition growth from 1989 to 2009, at 317% to 71% (it does not say whether this is in real dollars or not). This covers not just a bit of the GradPLUS effect, but also many years when the majority of loans borrowed were private, non-FFEL loans. Obviously, there are many causes - shrinking faculty:student ratios, IT costs, employee health care, physical plant expansion, possible debt service on the same, etc., but the underlying fact is that law school tuition has outpaced pretty much everything else in higher education. It would seem that removing (or at least minimizing) law school tuition *payments* to the central university would be a fairly simple partial solution. As to whether "other enterprises" need to be held to the same standard, it seems clear that they aren't. STEM programs, for example, are notoriously expensive, and yet are the public darlings of the age, with much vaunted wage premiums. Where's the call for STEM programs to have higher tuition so that they might even pay for their own expenses, let alone contribute to the central coffers?

Yeah, the tu quoque is silly, but then again, it seems the law school defenders and criticizers are on constant watch here, ever awaiting to do battle. Which even I must admit is a bit silly, given that this site is not exactly geared towards 0L readership (no offense meant to Prof Caron here; I just don't think too many undergrads are super into tax policy!). I suppose it is ultimately only evidence of great JD career options on the one hand and the free time inherent in 1-1 or 2-1 teaching loads on the other.

A quick question for UNE: You say the problem is solved by chronology. Even if that's true, that leaves open the future: Should law schools subsidize universities, or vice versa? Or does there always need to be a perfect equilibrium? If the latter--do you have other examples of enterprises held to that standard?

Also, the "tu quoque" of the Saturday afternoon comment above is priceless...please keep that up!

What a preposterous statement! A school with an average JD class of 250 and 250 LLM students at an average actual tuition rate of $30,000/yr would net $30,000.00 in revenue. That describes the healthiest schools in the 15-30 range (i.e. BC, Emory, Notre Dame). Where the heck does Rob T get the notion that an average school nets $40K in tuition? The last time he looked must have been 2008.

The truly average school (Ohio Northern, Denver, Drexel, Northeastern, etc.) probably has a JD class of 200 and 50 LLMs at an average tuition rate of $22,500 per year, netting annual revenue of $14.6 million. All these numbers are publicly available.

Actually, the paper relies on the demonstrably flawed Simkovic/McIntyre research. In other regards, UNE is right; the table reproduced above offers a lot of strawmen. It's also just weirdly and bizarrely framed; "things that people say that might contradict with other stuff they or others say about the same topic?" I mean, it just doesn't represent any sort of academic rigor. It puts anecdotes and musings into table form but doesn't add information or contribute to the debate in any way. It seems to represent the worst aspect of law faculty research, something that wouldn't get through peer review in any other academic field.

Haven't I already told you that weak ad hominems are what people resort to when they have nothing of substance to say? And here you are, at it again... And by commenting on my post, you are indicating that you don't have more productive things to do. On a Sunday, at that... You also haven't defended Pasquale's article in any way, which I continue to maintain is a pile of red herrings. When was the last time any law school critic brought up "Professors are so busy defending the poor" or "you need to get rid of small classes?" Never is the answer.

P.S. Neither my post nor the article have anything to do with Simkovic, so how much should we all read into you bringing him up out of the blue?

As I suggested as politely as possible in anther comments thread, and will suggest less politely now, the only thing that is likely to shut UNE up and teach him a little humility will be the public humiliation that occurs when he debates one of his betters live and in the open. Unfortunately, that is unlikely to happen, because UNE's intellectual superiors, such as Simkovic, have better and more productive things to do with their time than to swat gnats.

Anon doesn't actually address my point, which is that conditions can change over time. Earth-shattering, I know. For instance, my own law school's 1L enrollment has halved over the last few years and they are giving out dozens of >50% to >100% tuition discounts that they never gave out before. Ergo, they aren't bringing in as much revenue now as they were five years ago.

As for getting a life, you are also on this website on a Saturday afternoon. How about that?

UNE once again displays his ignorance about all things law school: an average law school generates 40 mn in revenue annually. the average tax by universities is 25%. that's 10 mn. off the top line of revenue. What's left is the cash available for all expenses other than services provided by the university out of their cut (utilities, etc.). Very few law schools if any have deficits that exceed the free cash flow paid off the top to their universities. So a lot of law schools likely now have budget deficits but their cash flow still exceeds their actual expenses by quite a lot. there is pressure to either lay off non tenure staff; buy out older tenured faculty; or increase revenue by lowering standards - but all to meet that post-University-tax deficit. And that's why you won't likely see any significant number if any law schools that are part of universities shut down or even fire tenured faculty. There is no actual financial exigency as required by the terms of most faculty contracts.

So, UNE, go get a life and stop filling up law school blogs with your nonsense.

And I have to say that most - heck, nearly all - of the "positions" in the right column are red herrings that I don't recognize coming out of the usual voices that Pasquale and other law school defenders deride.

2. Most of these "contradictions" are easily explained by chronology. Example: in 2010, when law school enrollment was at an all-time high, you had universities skimming off law school tuition (see the brouhaha at the University of Baltimore). Now that enrollment has fallen off a cliff, universities have to dig into their own pockets to keep law schools afloat (see Taxprof's coverage this week of the University of Minnesota). Voila! "Contradiction" solved.

Yes. Exactly this. The solution to legal education's problem cannot always be both "A" and "not A."