After worsening sharply during the Great Recession, the long-term fiscal outlook generally improved through 2015, due to a combination of legislative acts and lower projected growth of health care spending. The same factors and the slow but steady economic recovery helped reduce short-term deficits over that period, as well.

Over the past year, though, the medium- and long-term fiscal outlooks have deteriorated. Part of this is due to legislative changes, part to changes in economic and technical factors, and a small part to changes in assumptions. This deterioration has happened without much fanfare and, even with a fall in projected interest rates working in the other direction, the estimated changes are large.

Our estimates of various fiscal measures from last September and now are summarized in Table 1. Under current policy, we project the debt-GDP ratio to be 91 percent in 2025, up from a projection of 81 percent made last September and compared to the current-year value of 75.6 percent. The projected debt-GDP ratio in 2040 has increased to 152 percent of GDP, compared to 120 percent last Fall. Our estimates of the fiscal gap —the spending or tax changes needed to bring about a fiscal balance—have also increased. The fiscal gaps through 2040 have risen by about 1.0-1.5 percent of GDP, depending on various assumptions. The permanent fiscal gap has risen by similar amounts. 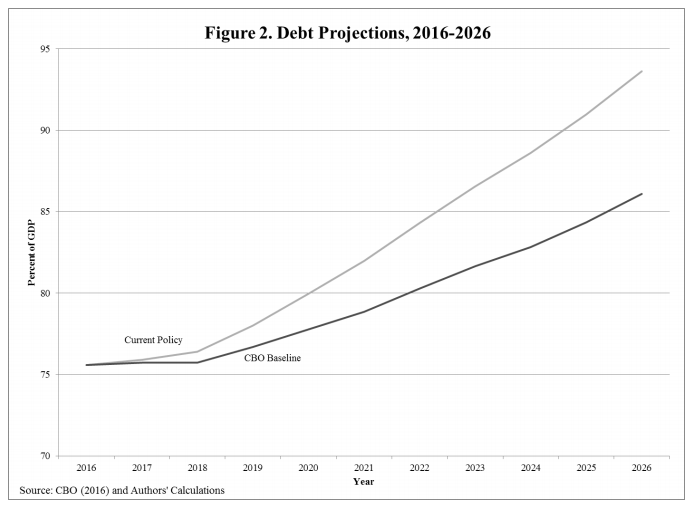 Howard Gleckman (TaxVox), Auerbach and Gale Find the U.S. Is Heading For a Fiscal Danger Zone

Current value of 75.6? Given a debt of 19 trillion that would make the U.S. economy 24 trillion. The authors might need to recalculate.

You tell me how we are supposed to pay the interest on this debt, much less pay down the principal?

At some point, we will have a cram down.

Mr. Spradling: To whom is that $200tt owed? Little green men from outer space?

MR. PN, it is debt owed to all of us, mostly governments. If you like, I can root around and get you the citations. However, this is not secret knowledge, except to the happy talk people. Google is your friend.