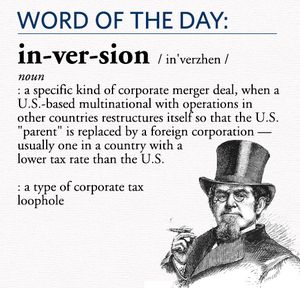 I want to lower my taxes. It’s one of my dreams, along with becoming taller. And younger. And much, much richer.

I can’t do anything about most of that list. I do know one way to pay less to Uncle Sam, but the only surefire method I have ever come up with is to make less money. I’ve been there. Didn’t like it.

So I’ve decided to try something more sophisticated. I’ll invert myself. ... I’d like to borrow a nifty trick from the business world, where it is called a corporate tax inversion.

It works like this: Using merger magic, American companies move their headquarters to a country with lower rates. They escape the high American corporate tax rate, and also our taxation of a company’s worldwide income. (Many other countries tax just profits within their borders.)

The beauty is that a corporation doesn’t actually have to move much of anything, except its supposed tax headquarters: Top executives can stay stateside. ...

I want to act like a corporation and enjoy the good life. How hard could it be?

I called Adam Chodorow, who teaches tax law at the Sandra Day O’Connor College of Law at Arizona State University. Professor Chodorow has expertise in many areas of tax law, with respected scholarship in his field. He also wrote a law review article, Death and Taxes and Zombies, which examined how estate and income tax laws might apply to the undead. This, my friends, is the kind of out-of-the-box thinking I was seeking. ...

He suggested I would be going to a lot of trouble, since I had a way to stop paying United States taxes already. “It’s simple,” he said. “You just renounce your U.S. citizenship.” Well, my friends, that rubbed me the wrong way. I love America! But, as is the case with so many of my freedom-loving countrymen, that doesn’t mean I want to pay taxes.

Besides, as Professor Chodorow explained, to enjoy the tax advantages of giving up my national birthright, I’d have to leave the United States for good, which did not seem fair. Why should I have to leave if corporations like Tyco, Pfizer and Allergan can stick around but call themselves Irish? Allergan stayed in New Jersey, so why can’t I? ...

Professor Chodorow went down a list of possible ways I could act like a corporation — clearly, I’d have to merge with someone in, say, Ireland. That’s not so easy, either, however. Marriage might look like a merger, but marrying someone in Ireland does not make you a citizen of Ireland. ... , he noted. Congress would have to pass a law saying that marrying someone in Ireland would make you a “stateless citizen.”

What about getting adopted by someone in Ireland? Isn’t that closer to what an inversion looks like? But Professor Chodorow was unenthusiastic about that, too. He said I’d really need to “create a brand-new entity and become a subsidiary of it.” That’s not the same as being adopted, he told me. “Technically,” he concluded, “they have to buy you. And that doesn’t really translate well into individuals.” The whole idea of selling myself is a no-no because of the 13th Amendment to the Constitution, he said. That’s the one that outlawed slavery. We just couldn’t figure out how to get somebody in Ireland to purchase me legally — especially if, as in corporate inversions, I provided the money for the sale. ...

I’m a little discouraged. Inverting myself for tax purposes isn’t going to be possible or profitable right now. There seems to be no legal way to sell myself to the highest bidder.

Someday, I’ll have to ask the politicians how they do it.

No doubt this article is in jest. However for the 8.7 million US persons overseas, it is very much true that corporations get a better deal than individuals. And "deal" is the wrong word when talking about US individuals living overseas - companies get a deal, individuals get smashed. It is all UnAmerican.

The situation of US persons tax resident abroad:

Without Representation (would never have agreed to it all)

Without US Government Services (that US resident US persons may receive)

Without a Care By The US Government For One's Well Being (just about stick and compliance).

With Unfathomable Compliance (obligation to overlay the 74,000+ page US tax code on top of the tax code of one's country of residence).

With Excessive Compliance Cost (see above - it all requires highly specialized assistance and can't be done with TurboTax, and you don't use that because of the potentially bankrupting penalties (that US residents do not face for their everyday accounts in the US if not done right).

With Excessive Compliance Penalties (The U.S. tax rules punish accounts and investments that are foreign to the USA. The compliance penalties for not reporting accounts right could be bankrupting even if no US taxes are owed).

Any US persons living overseas caught up in this must visit the message boards of The Isaac Brock Society and Facebook Citizenship Based Taxation and American Expatriates Groups; and consider donating to the FATCA IGA lawsuit and contribute to citizenshiptaxation.ca .

US citizenship should be about the greatest liberty in the world. Yet the truth is US persons living overseas are tremendously disadvantaged by the US government compared to nationals from all other OECD countries. US policies should be consistent with its founding principles. The US should adapt Residence Based Taxation! (like the rest of the OECD).