Why Are There So Few Conservative/Libertarian Law Profs, Even Though They Are More Productive Scholars Than Liberal Law Profs?

There are few conservatives and libertarians in legal academia. 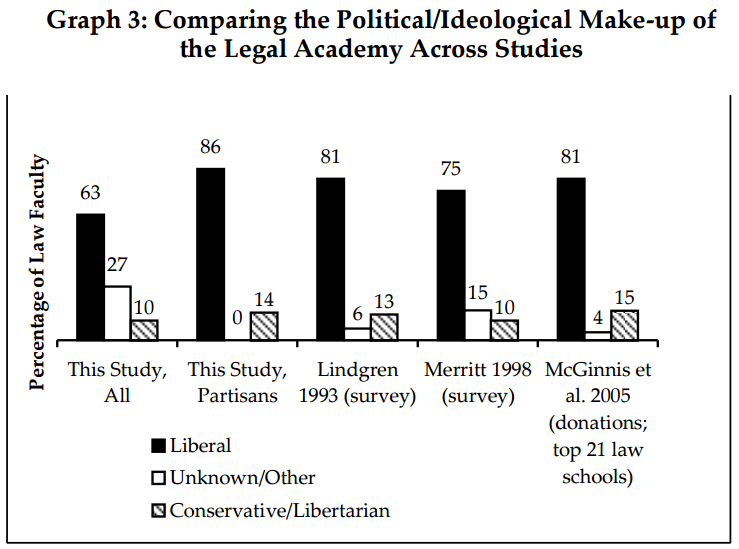 Why? Three explanations are usually provided: the Brainpower, Interest, and Greed Hypotheses. Alternatively, it could be because of Discrimination. This paper explores these possibilities by looking at citation and publication rates by law professors at the 16 highest-ranked law schools in the country. Using regression analysis, propensity score matching, propensity score reweighting, nearest neighbor matching, and coarsened exact matching, this paper finds that after taking into account traditional correlates of scholarly ability, conservative and libertarian law professors are cited more and publish more than their peers. 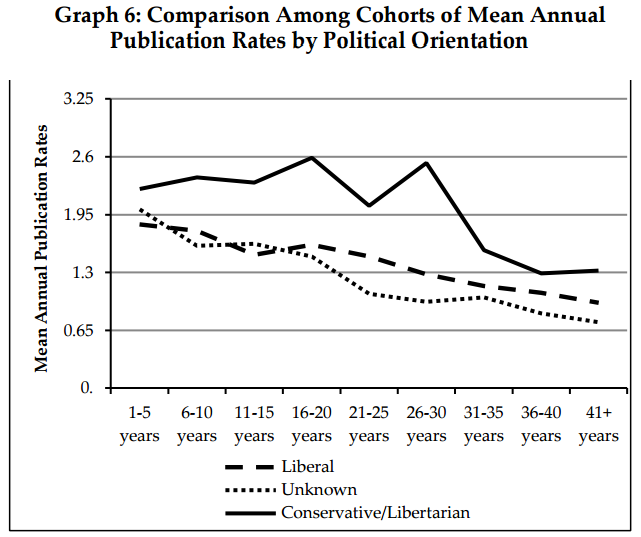 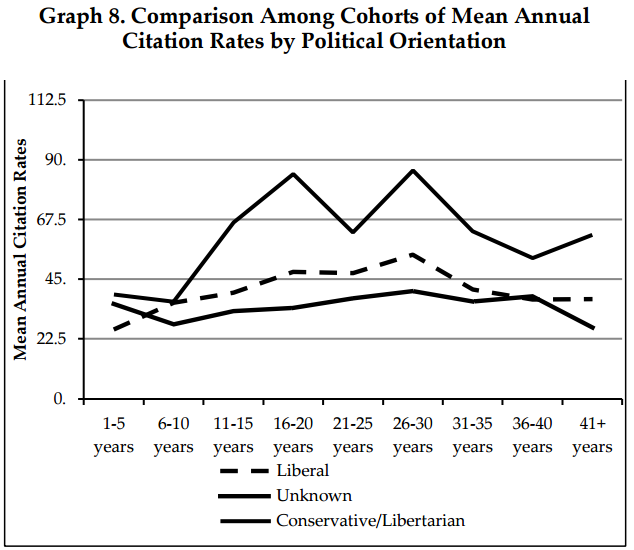 The paper also finds that they tend to have more of the traditional qualifications required of law professors than their peers, with a few exceptions. This paper indicates that, at least in the schools sampled, conservative and libertarian law professors are not few in number because of a lack of scholarly ability or professional qualifications. Further, the patterns do not prove, but are consistent with, a story of discrimination. The downsides to having so few conservatives and libertarians in the legal academy are also briefly explored.

Todd's comment has a number of problems: Are there really so many marxist law professors? Regardless, the graphs reproduced above do not account for left/socialist/communist/anarchist political views. The graphs show the political right (conservatives/libertarians) and the center (liberals). The left is entirely omitted, or perhaps subsumed under "unknown".

The cited paper seems like a lot of "sour grapes" whining by the same folks who claim that affirmative action is discriminatory. These people should be ignored out of existence.

One must be more productive if others in one's organization are relentlessly trying to force him out due to obsession with ideological purification.

Marktheknife, how does that explain the difference in productivity? Is your thinking that conservatives write more because they have more to say that hasn't been said already?

Max - No, todd's hypothesis still makes sense. You tend to try to write on both sides of an issues if there is a debate. Therefore, for any topic, you'll need conservative and liberal voices (since that's the typical divide on most topics). That's all that's happening here.

I love that "Conservative Law Prof" seems to believe:

1) It's an easy transition from a large law firm to an inhouse role these days,

2) That inhouse counsel makes $400k five years out from graduation, and

3) That any appreciable percentage of inhouse counsel anywhere make $400k/year at any point in their careers. Per Payscale, the median CLO pay in the US is $180k and the 90th percentile pay is $320k.

Todd's hypothesis makes sense. Also with fewer competing authors it's easier to identify topics worth writing about and less likely that you will be denied publication.

Conservative Law Prof - Your idea would show up as different numbers. Sure, the raw numbers might match, but there's no reason for the publication productivity or the citation numbers to run that way. In fact, it would be reasonable to think that they'd go the other way, with conservatives having less published papers and less citation influence.

Because a law professor is someone who was at the top of their class at an elite law school and decided to turn down a job at a top corporate law firm with a 5-year track to an in house counsel job where they could be making $400,000 per year for working 40 hours per week to go into academe where they make one third as much for working twice as hard.

Liberals who have hangups about money and big corporations being evil, or who want to fight for "social justice" might make that choice.

Most Conservatives don't have those hangups and would rather earn more and help their families and friends instead of strangers.

I'm a firm believer in the liberal hive mind in academia and discrimination being behind this, but here's another thought regarding the citation rate:

Since there are so few conservative/libertarian professors, when a person is looking for a paper to cite on a subject a libertarian professor would likely write on, there are less options to choose from so therefore they get more cites due to scarcity and not necessarily quality. There are 500 professors writing about a Marxist perspective on XYZ, or social justice and pink bunnies, but way less on right of center topics.