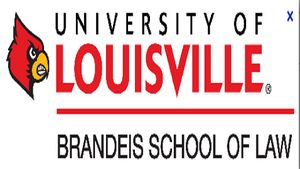 As I approach the end of my 20th year as a law teacher, I should no longer be surprised that law professors can find a way to complain about things as seemingly pleasant and uncontroversial as blue skies and children’s laughter.  Or, in this instance, compassion.

Nevertheless, I found myself not only surprised, but deeply disappointed and frankly embarrassed that my colleague, Professor Luke Milligan, wrote a misleading opinion column in this space on Jan. 13, objecting to the proposal to have the Brandeis School of Law partner with the city, and many of our leading corporate and civic institutions, as part of the Compassionate Louisville campaign.  The views Professor Milligan expressed completely misrepresented both the nature of the Compassionate Louisville campaign and the law school’s commitment to it.

The premise of Professor Milligan’s polemic was that identifying the law school as a compassionate institution is somehow a “partisan” stance that takes sides in ideological wars in which he believes a law school should not take sides.  I’m sure that community leaders such as Brown-Forman, Metro United Way, Spalding University, YMCA of Greater Louisville, Norton Healthcare, Guardiacare, KentuckyOne Health, Sacred Heart Academy, Yum! Brands, the University of Louisville Medical School, and dozens more will be quite surprised to learn that by partnering with the Compassionate Louisville initiative, they have all taken sides in the culture wars or been somehow partisan.

This is an astonishingly sad way to look at the world — and especially to see the notion of compassion, as being the exclusive preserve of one ideology.  I do not believe it ever occurred to anyone who proposed this at the law school or voted for it that it had any ideological or partisan content at all, or that supporting it somehow sent a message that a commitment to compassion would, could or should exclude anyone based on party or ideology.  It is — not to put too fine a point on it — nonsense to suggest that an initiative toward compassion tells anyone associated with the Law School (whether they are alumni, faculty, staff, or students) that they are outsiders. ...

Professor Milligan’s claims of enforced ideological conformity are a tired cliché, with no basis in the reality of what compassion actually means in the context of the law school’s participation in the City of Louisville’s initiative.  Any faculty members who don’t share the institutional commitments are completely free to set their own scholarly and service agenda, and teach their classes as they see fit; nothing either compels or pressures any of us to go along. ...

The simple reality is that the name “Louis D. Brandeis” is right there over our front door, and has been since the Law School was named for him in 1997.  It is thus nothing new that we stand with the city of Louisville on the side of compassion and social justice.  It is part of who we are, and what every law school should aspire to be.

I see legitimate peaceful protesters of color tear-gassed, beaten, and sometimes shot, only to turn around and find armed “white” terrorists who have seized a federal building seeking pardon for other illegal activity being addressed civilly. The world is not neutral, and to apply an allegedly neutral rule of law, absent real circumstances, is like trying to force a square block into a round hole. So why should our law school be an exception to the truth? ...

The last time I checked, merit was a salon of what you call “self-congratulation” because it fails to recognize the inevitable help from others. Nobody pulls themselves up by their own bootstraps, because, if they did, my neighborhood would look way different, instead of every third house empty and kids playing with rotten basketballs and milk crates.  What is merit apart from opportunity?

In the marketplace, everyone should have a say, not just the elite controlling the “marketplace” by generations upon generations of wealth through inheritance grandfathered into every opportunity they want.

Professor, you wrote, “[S]tudents were instructed on Day 1 of law school to rise and make public declarations regarding their race, religion, and sexual orientation.” This is totally not true, and I do not remember seeing you there. We were not “instructed” to do anything. We were clearly and humbly given an opportunity to stand,  identify, and celebrate in unity the same social groups the powers that be use to separate us. It was ultimately an act of dissent in unity, a peaceful practice of inclusiveness that our school is known to value. Moreover, I have not met a student yet believing that one-time experiment was forced upon them.

They appear to be a decent, ranked law school. Let that speak for itself Why "sell" a law school? Like TJLS, Cooley or Valpo, etc, etc, etc, etc. "Find new Roads with Chevy." "Pursue Social Justice at Louisville." I guess everyone has a brand these days.