Krugman:  Professors Have Not Become More Liberal; They Have Rejected A GOP That Has Moved Sharply Right

New York Times:   The Conscience of a Liberal — Academics And Politics, by Paul Krugman (Princeton):

Via Noah Smith, an interesting back-and-forth about the political leanings of professors. Conservatives are outraged at what they see as a sharp leftward movement in the academy: 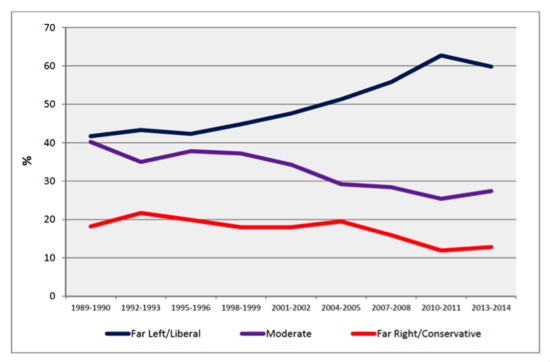 But what’s really happening here? Did professors move left, or did the meaning of conservatism in America change in a way that drove scholars away? You can guess what I think. But here’s some evidence. ...

First, using the DW-nominate measure — which uses roll-call votes over time to identify a left-right spectrum, and doesn’t impose any constraint of symmetry between the parties — what we’ve seen over the past generation is a sharp rightward (up in the figure) move by Republicans, with no comparable move by Democrats, especially in the North: 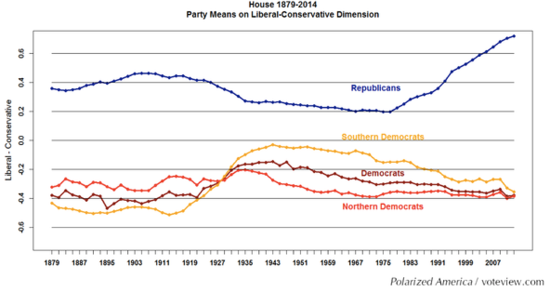 I'm not sure that what Krugman is showing actually translates to the academy, but it confirms my belief that neither Nixon nor Reagan, as they were then, would be nominated for the Republican party candidate because they'd be too liberal.

I think it's silly to use the word "moderate" in this context, as this seems like a normative and highly subjective word. A better word to capture what's intended to be conveyed here is the word "centrist". I think most people view their own views as moderate (i.e., good, fair, proper) and the views of those who disagree with them as extreme (i.e., not moderate, not good, not fair, not proper).

That simply goes to show that a genius a Nobel Prize maketh not. There is an ideological divide in this country like I've not seen in my 55 years nor my father in his 80's. When looking at the Left, I hear tell that New Hampshire may cast its votes for the first open Socialist within the Democratic Party. Naw, thats not a move left.