Highest State And Local Tax Burdens Are In Blue States, Lowest Are In Red States

New Yorkers faced the highest burden, with 12.7 percent of income in the state going to state and local taxes. Connecticut (12.6 percent) and New Jersey (12.2 percent) followed closely behind. On the other end of the spectrum, Alaska (6.5 percent), South Dakota (7.1 percent) and Wyoming (7.1 percent) had the lowest burdens. 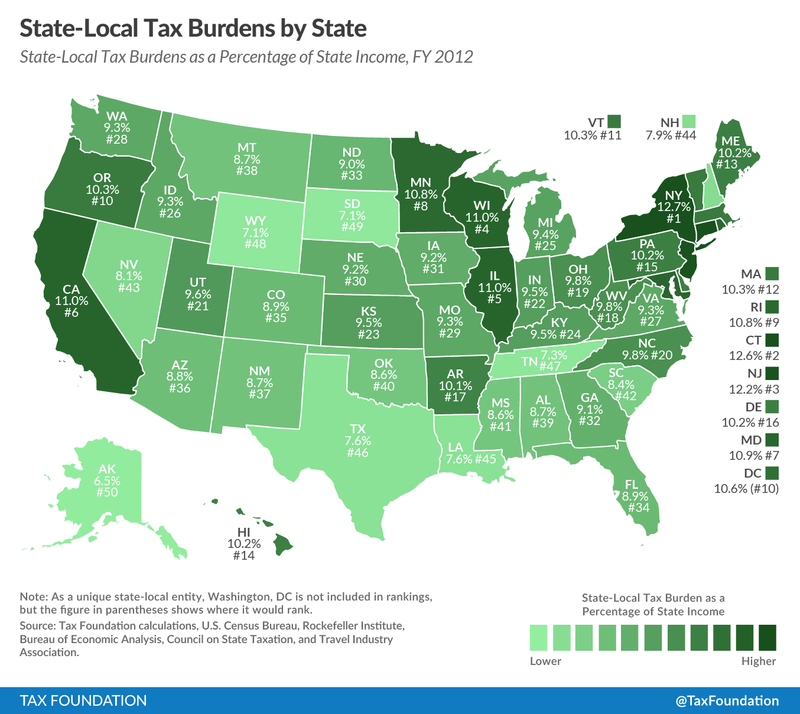 I like Texas for three reasons: Jim Hightower, Lyndon Johnson and Ann Richards. There you go......

Let's discuss Texas: Your Child Protective Services is a mess. You can't take care of Neglected children. Your educational attainment levels are very very low. Compare to Illinois and California. Your obesity rates are off the charts....

Captain Hruska Carswell,, You are confused if you think high tax teacher unionized states like Wisconsin have betters schools than low tax right to work states like Texas. You need to adjust statistics for other variables. Texas is superior. Look up "Iowahawk Longhorns 17, Badgers 1"

Perhaps you would like to compare the standardized test results of students in California and Illinois with those of students in Texas. It gets really interesting when you break those test results down by demographics. Why do you hate black children?

The problem with those high tax areas is sustainability.

People used to like to live in Detroit too.

Let's see. Texas has no state income tax. Since I'm turning 65, my local property tax on my $150K home will be under $1k, there is zero crime in the small town I live in and excellent schools. The city and county are run by conservatives and democrats don't even bother getting on a ballot. My electricity cost just went down due to the co-op finding savings, I have 6 different lakes within 30 miles and the state interferes in my life almost not at all. Yah, you keep Chiraq or Kalipornia with the illegals and crime. I'll stay here.

Publius...and you have Baltmore? Wow. And your high income is only due to your proximity to D.C....thus based on feeding at the trough of everyone else's federal tax dollars. What a guy.

Who wants to live in a Red State with bad social, health, transportation, and educational outcomes? I will take the Land of Lincoln or the Land of Fruits and Nuts over Texas, Mississippi, Arkansas, Louisiana, and Kansas, home to the Westboro Baptist Church any day. I would rather be taxed than live in any of the latter states.

Ah yes, the Tax Foundation annual tax burden rankings of the states. I live in Maryland, which has the seventh highest tax burden, at least according to TF. On the other hand, I can drink the water from my tap, our children attend the third-best public schools in the nation (down from #1; we elected a Republican gov), and we have the second-highest per capital income. I'm thinking I'll stick with our tax burden.