On Tuesday, the New York Times published a front page article on How The Ultra Wealthy Buy Tax Policy, which contained this statement:

Two decades ago, when Bill Clinton was elected president, the 400 highest-earning taxpayers in America paid nearly 27 percent of their income in federal taxes, according to I.R.S. data. By 2012, when President Obama was re-elected, that figure had fallen to less than 17 percent, which is just slightly more than the typical family making $100,000 annually, when payroll taxes are included for both groups.

On Wednesday, the IRS released updated data showing that in 2013 the Top 400 taxpayers bore the highest tax rate since 1997: The top 400 U.S. taxpayers in 2013 faced their highest average tax rate since the 1990s, the result of policies implemented by the Obama administration that reversed a decadeslong trend toward lower tax burdens for the wealthiest Americans.

The 400 households represent the upper stratum of American wealth, requiring income of $100 million in one year to crack the bottom of the list in the latest figures. 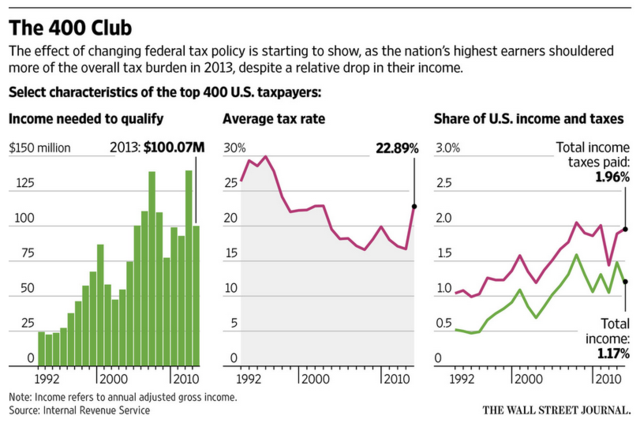 They are mostly athletes and entertainers, eh? How many made $100.07 million in calendar 2013? I'm guessing you can count them on your fingers, which makes them less than 1/40 of the list. Only two athletes appear to have EVER broken $100 million in a single year: Floyd Mayweather and Tiger Woods. Only two American musicians broke $100 million last year: Bon Jovi and Lady Gaga, and those are both before production costs of their tours are factored in. The highest-paid actor last year was Robert Downy Jr., who got a percentage of the gross of Avengers 2. He's $20 million short of cracking $100m, and this is pre-management/agent/lawyer/etc fees. All figures courtesy of Forbes.

Once again, the media (and many academics and pundits) confuse income with wealth and call for higher taxes on the rich, i.e., the wealthy. It doesn't take much imagination to guess most of these "Rich 400" are entertainers and athletes. Does anyone remember, for example, when Tiger Woods got a $50 million signing bonus? Moreover, the non-celebrities in this group are most likely members of the lucky IPO group, e.g., Meg Whitman when eBay went public.

The real question is how many of the Rich 400 stay in the group year after year? That is, how much money did Tiger Woods make in 2013? This is a key point the Emmanuel Saez crowd never gets; namely, participation in the richest 400 group changes every year. This means when a taxpayer knows he or she is going to hit a "knock the skin off - out of the ballpark home run" they get desperate to avoid the
heavy hand of our tax code (you don't take percentages to the bank) and do dumb things to try and hang onto what they consider to be their own money.

Said another way, high income earners and the wealthy are not stupid. They don't have to put up with being beaten like a rented mule.