After more than four decades of serving as the nation’s economic majority, the American middle class is now matched in number by those in the economic tiers above and below it. In early 2015, 120.8 million adults were in middle-income households, compared with 121.3 million in lower- and upper-income households combined, a demographic shift that could signal a tipping point, according to a new Pew Research Center analysis of government data.

In at least one sense, the shift represents economic progress: While the share of U.S. adults living in both upper- and lower-income households rose alongside the declining share in the middle from 1971 to 2015, the share in the upper-income tier grew more.

And middle-income Americans have fallen further behind financially in the new century. In 2014, the median income of these households was 4% less than in 2000. Moreover, because of the housing market crisis and the Great Recession of 2007-09, their median wealth (assets minus debts) fell by 28% from 2001 to 2013.

Meanwhile, the far edges of the income spectrum have shown the most growth. In 2015, 20% of American adults were in the lowest-income tier, up from 16% in 1971. On the opposite side, 9% are in the highest-income tier, more than double the 4% share in 1971. At the same time, the shares of adults in the lower-middle or upper-middle income tiers were nearly unchanged.

These findings emerge from a new Pew Research Center analysis of data from the U.S. Census Bureau and the Federal Reserve Board of Governors. In this study, which examines the changing size, demographic composition and economic fortunes of the American middle class, “middle-income” Americans are defined as adults whose annual household income is two-thirds to double the national median, about $42,000 to $126,000 annually in 2014 dollars for a household of three. Under this definition, the middle class made up 50% of the U.S. adult population in 2015, down from 61% in 1971. ... 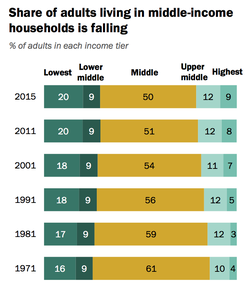 In addition to changes in the size and economic standing of the American middle class, its demographic profile has changed significantly in recent decades. Some of the changes reflect long-term demographic trends in the U.S., as the middle class is in many ways a mirror of the broader population. For example, the aging of the country, the growing racial and ethnic diversity, the decline in marriage rates and the overall rise in educational attainment are all reflected in the changing composition of the middle class.

I looked at the Pew report and it has a chart that says that 71% of Americans are middle income. Then it carves out chunks of the middle class on the high end (9% points) and low end (12% points) and re-assigns them to upper & lower income. Strange.