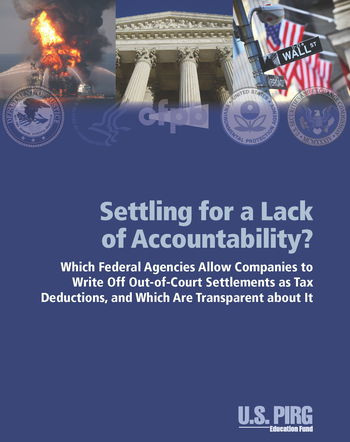 Corporations continue to use big civil legal settlements with federal regulators as a way to deduct billions of dollars from their American tax bills, largely because the regulators fail to forbid the practice in the terms of the settlements.

BP’s pending $20.8 billion settlement with the Justice Department and other federal and state regulators related to the Deepwater Horizon oil spill in 2010 allows about $15.3 billion to be classified as a tax-deductible business expense, according to an analysis by the United States Public Interest Research Group, a nonprofit advocacy group [Settling for a Lack of Accountability? Which Federal Agencies Allow Companies to Write Off Out-of-Court Settlements as Tax Deductions, and Which Are Transparent about It].

Likewise, the Justice Department’s $25 billion mortgage settlement with Bank of America, JPMorgan Chase, Wells Fargo, Citigroup and Ally Financial in 2012 — billed at the time as the largest consumer financial protection settlement in United States history — allowed $20 billion to be eligible as a deduction for those banks.

U.S. PIRG analyzed the 10 largest settlements by five federal regulators since 2012, six of them bank settlements in the aftermath of the financial crisis. The report, to be released on Thursday, found that while corporations paid a collective $80 billion to resolve federal charges of wrongdoing, some $48 billion of that amount was eligible as a deduction. The end result was a loss of $17 billion in tax revenue, more than the annual amount in estate taxes collected by the Internal Revenue Service, the group noted.

In BP’s case, the company had already written off $37.2 billion in cleanup costs arising from the Deepwater Horizon spill and claimed a $10 billion tax credit.

Short of changing the federal tax code, which allows companies to classify civil settlements, including restitution and other payments, that are not fines as tax-deductible, U.S. PIRG is urging agencies to disclose more details about their agreements.