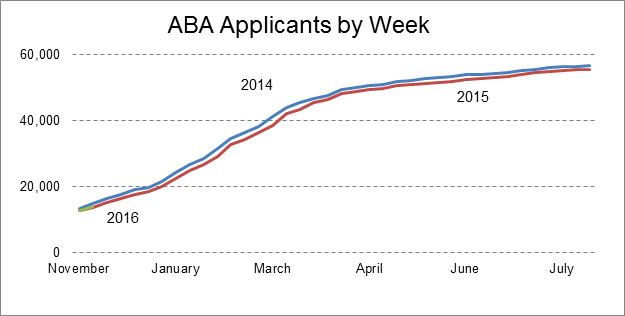 One initial observation about this data is that while we are seeing a tiny uptick in overall applicants, there's a decline in applications, which suggests to me that students are feeling more confident in their applications.

Yes, this never had anything to do with the 2008 downturn. The broad practice of reporting fraudulent salary statistics to the the tune of salaries that were reported as double what they actually were, was in place since at least 2001 and likely plateaued at a high point by 2007 (based on my observations). Consequently, during all of these years with the fraudulent data, there was an artificially high number of high-caliber college graduates pursuing legal careers, many of which careers were DOA. Now that schools can't post the fraudulent statistics as easily, there will permanently be a lower number of matriculants. This difference in the number of matriculants roughly represents the number of people who were defrauded each year.

A bump in LSATs, a decline in applications, and an almost flat number of applicants suggests flight to quality. It will be another rough year for many of the schools ranked 25 to 125. Successive attempts to hold quality but fund classes must be taking their cumulative toll on budgets.

Sad thing is that many in this group are great schools with regional respect. It is a national glut, though, and you can't fight the market.

Have you noticed that fewer people now are trying to invoke the 2008 recession to explain these data away? I have.