The Chronicle's executive-compensation package has been updated with information on private-college presidents for the 2013 calendar year.

The update provides data on 558 chief executives at 497 private nonprofit colleges in the United States. The median salary for leaders in office for the full year was $436,429. Thirty-two of the presidents earned more than $1 million.

The most recent data on public-college presidents, also from 2013, include information on 238 chief executives at 220 public universities and systems in the United States. The median salary for those in office for the full year was $428,250. Two of the presidents earned more than $1 million.

Here are the Top 15 private college presidents by total 2013 compensation: 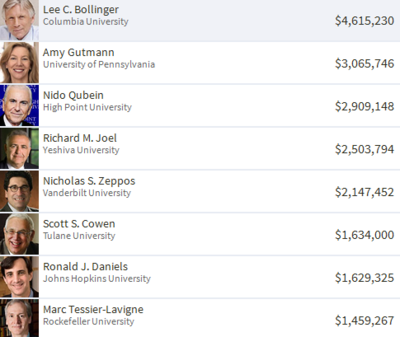 Here are the Top 15 public college presidents by total 2013 compensation: 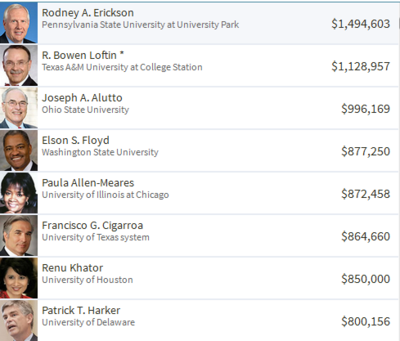 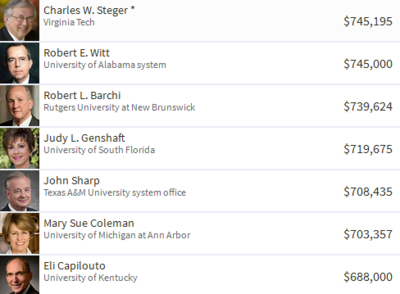 We need to impose wage and price controls on the colleges, before they eat us out of house and home.

Old Curmudgeon: All of them. Adjuncts are paid less than minimum wage.

Executive salary limits would be amusing in this context ... I wonder how many of these presidents/coaches earn more than 50x what an adjunct professor earns that that school?

Does this mean that public universities are managed less well?

It's good money, but a lot less than private sector money.
http://www.nytimes.com/interactive/2015/05/14/business/executive-compensation.html