For the first time, government data back up what some parents have long suspected: Students who choose elite liberal arts colleges don’t earn as much money early in their careers as those who attend highly selective research universities.

The disparity, determined by a Wall Street Journal analysis of the data, means that some liberal arts colleges may face tough questions about the potential payoff of their expensive tuition. 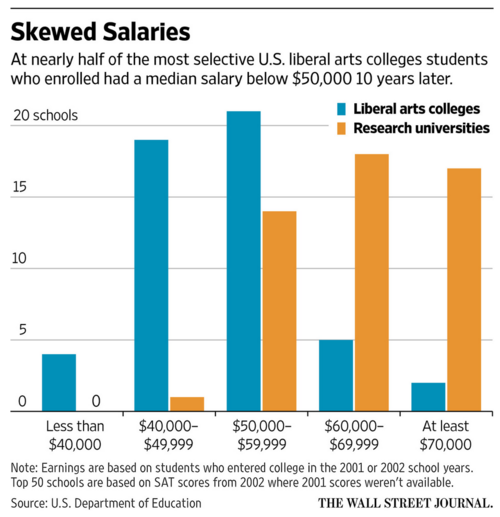 The Journal compared median earnings 10 years after students enrolled at the most selective liberal arts colleges in the country to median earnings for students at the most selective research universities. The Journal analyzed salary figures for the top 50 schools in each category that had the highest average SAT scores [search data on individual schools here]. Those Ivy League schools, selective state colleges and other national universities compete with liberal arts colleges for the many of the same highly qualified applicants.

Graduate school does mess these data up a little. They're tracking income ten years after starting college, which is six years after graduating if you went right through. If you're in a humanities Ph.D, you would still be a student then. My income six years after I graduated college was $13,000, because I was a full-time Ph.D student.

Maybe people go to liberal arts colleges for education rather than for jobs.

It comes directly from the WSJ article, and it's federal AID, not federal LOANS. For the class they measured, 12% of Harvard students had Pell Grants and 3% had federal student loans. Harvard (and Yale, Stanford, Princeton, and maybe two dozen other very wealthy institutions) have had no-loans policies for several years now.

Northeastern- please point me to the data that says 85% of Harvard student take no federal loans. If true, I would find that shocking.

For once, I agree with Reader (broken clock 2x a day, etc). Several of the liberal arts colleges in my undergrad's athletic league, perhaps including my own, used to brag incessantly that 65% or 70% or 80% or more of their graduates eventually wind up with an advanced or professional degree. I will add that those schools have mostly seem to have culled these boasts over the last few years as the job outcomes of lawyers and graduate and students and postdocs and veterinarians and PharmD grads, etc., etc, became more well-known. Swarthmore used to claim that 90% of its graduates hold an advanced/professional degree, if I am not mistaken. Heck, my own alma mater, one of the highest-ranked liberal arts colleges out there, proactively warns students to stay away from law school unless they get into a top program, get a no-conditions free ride, or their parents are paying. And before certain commenters interject, I have nothing to do with that. And someone doing an increasingly popular joint MD/PhD program will still be in school even if they continued straight through from undergrad.

They just used the federal data, which does not control for either (1) region of the country, or (2) what graduates are doing ten years out. Some liberal arts colleges send a much higher percentage of graduates into PhD programs than do selective universities. They also do not control for gender. Liberal arts colleges have more female students on average, and women are still more likely to leave the job market for child rearing. So this is typically misleading reporting!

Super duper reductive *study.* For one, by the time you get to the 50th ranked liberal arts college, you are squarely in the realm of "graduate school or underemployment," which is hardly the case at the #50 research university. For another, "The data reflect only students who received federal loans or grants—a sliver of the population at some top universities. For instance, less than 15% of Harvard undergraduates received federal aid in 2013." That means they are studying a fairly inconsequential minority of students at these schools, which largely have similarly top-heavy income spectrums. This also means that the role of social capital is essentially nonexistent in the results, and as a graduate of one of those top liberal arts colleges with an ineffective career services office, I can vouch that one's personal/family social capital plays an ENORMOUS role in landing on your feet after graduation. For a third, a plurality (at least) of elite liberal arts college graduates majored in a hard science, comp sci, math, and sometimes engineering (at least in the Northeast, few liberal arts colleges have dedicated engineering programs, but virtually all do dual-degree program with engineering schools at a Tufts or Dartmouth or similar). For a third, according to William Deresiewicz's "Excellent Sheep," at least 26 of the top 40 liberal arts colleges and national universities (i.e. the top 20 of each group) have economics as the most popular major, so it's not as if the areas of study are completely heterogeneous between, say, Harvard and Williams or Wesleyan and Yale.