TIGTA: IRS Should Shift Definition Of Rich From $200k to $600k For Audits

The Treasury Inspector General for Tax Administration has released Improvements Are Needed in Resource Allocation and Management Controls for Audits of High-Income Taxpayers (2015-30-078):

Given the IRS’s goal of providing higher audit coverage to high-income taxpayers and its reduced operating budget, it is that much more important that the IRS selects audits that have the highest compliance impact.  However, it is not clear that the IRS audits the most productive high-income taxpayer cases or that it has a clear rationale for the inventory balance it has established among taxpayers at different TPI levels.

We conducted an analysis on Fiscal Year 2014 audit closures of high-income taxpayers comparing the number of audits to the number of tax returns filed in Calendar Year 2013 to evaluate the IRS’s audit coverage and audit productivity in the various TPI ranges.  Figure 5 shows that the IRS is providing increased audit coverage as a percentage of each TPI range as the high-income taxpayers’ TPIs increase. 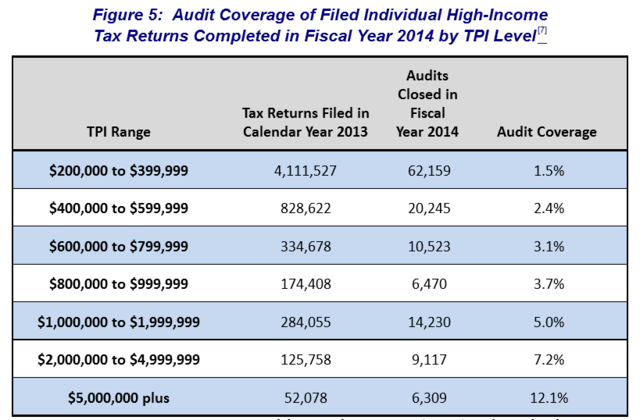 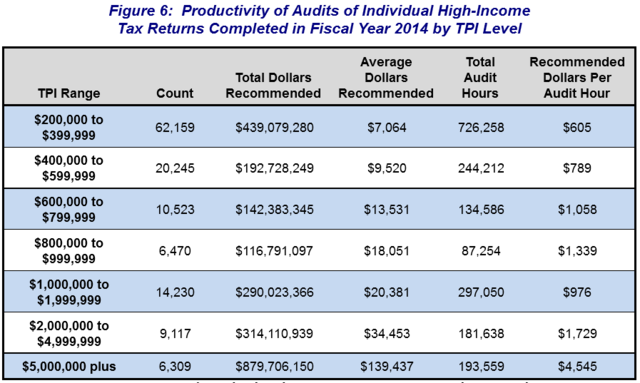 The IRS’s goal of providing enhanced audit coverage to high-income taxpayers is important; however, Figure 6 demonstrates that the IRS’s High-Income and High-Wealth strategy devotes nearly 50 percent of its high-income audits to taxpayers earning $200,000 to $399,999, whose tax returns potentially present the least productivity of all high-income taxpayers. Figure 6 also reflects that the number of audits conducted by the IRS greatly declines when the income range reaches the $400,000 TPI level. Further, the IRS audits far fewer taxpayers with incomes of $600,000 or more even though they appear to be the most productive audits.

Considering the variance in productivity shown in Figure 6 above between the lower and higher TPI ranges, we asked the IRS for the rationale behind continuing to use a $200,000 TPI to identify high-income taxpayers. Because the IRS is devoting more audit resources for high‑income taxpayers, it is important to know at what level of income or wealth taxpayers tend to begin establishing complex financial holdings that are at greater risk for noncompliance with the tax laws. In response, the IRS provided a July 2009 report that concluded, based on Processing Year 2006 data, that there was not sufficient evidence to support increasing the income threshold for those taxpayers it considers high-income. The IRS also stated that it has not completed any other studies pertaining to setting a TPI level for high-income taxpayers.

The decision of where to set the high-income TPI threshold has a significant bearing on how IRS audit resources are used. Because there are more taxpayers in the $200,000 to $399,999 range than in higher income ranges, it appears that the IRS is spending most of its audit resources on auditing tax returns with potentially lower productivity. IRS management told us that decisions on resource allocation cannot be made solely on the basis of productivity measures alone (e.g., Recommended Dollars per Hour). However, given the decreasing budgets that the IRS is working under, it is critical for the IRS to determine the best use of its limited resources. While coverage of different taxpayer groups remains important, the IRS should reevaluate the appropriate income thresholds for its High-Income and High-Wealth strategy and reassess its case selection methodology to determine if more emphasis should be given to auditing taxpayers with higher TPIs to address the higher potential productivity shown for those TPI levels.

There is probably more tax fraud among people in the lower tax brackets that claim deductions and credits that are far in excess of what they should be claiming. How about treating all taxpayers equally so we don't lose up to a trillion dollars a year due to individual income tax fraud?