The receipt of workplace fringe benefits has become increasingly ubiquitous. As a result of their employment, employees often receive a cornucopia of fringe benefits, including frequent-flier miles, hotel reward points, rental car preferred status, office supply dollar coupons, cellular telephone use, home Internet service, and, in some instances, even free lunches, massages, and dance lessons. Technological advances and workforce globalization are important contributory factors to the popularity of what were, until the turn of this century, previously unknown fringe benefits.

For many years, this statutory framework sufficed to maintain the integrity of the tax base and to ensure taxpayer compliance. However, there has been a fundamental transformation in the manner in which a sizable segment of fringe benefits are currently dispensed. Rather than originating from the employer, they are instead supplied by various third-party vendors such as airlines, hotel chains, rental car companies, office supply distributors, and Internet and cell phone providers. The existing statutory tax compliance framework does not adequately address this marketplace transformation as many of these third-party-provided fringe benefits are not specifically excluded from income yet are not currently being reported as taxable.

This analysis examines what has been an increasingly commonplace phenomenon: employers and employees ignoring their responsibilities to report the receipt of these third-party-provided fringe benefits as taxable income. It argues that Congress has an obligation to preserve the tax base and, accordingly, must institute reform measures to ensure taxpayer compliance. Failure to take action will trigger an expansion of such fringe benefit offerings, eroding the tax base and jeopardizing the integrity of the income tax system.

The authors shed light on an evolving area of tax policy that policymakers would do well to pay attention to.

For some background: eighty years ago, it was relatively uncommon to offer workers compensation other than their regular wages and salaries. In 1929, only 1.9 percent of employee pay took the form of fringe benefits. By 2014, fringe benefits had risen to 19.2 percent of worker compensation. 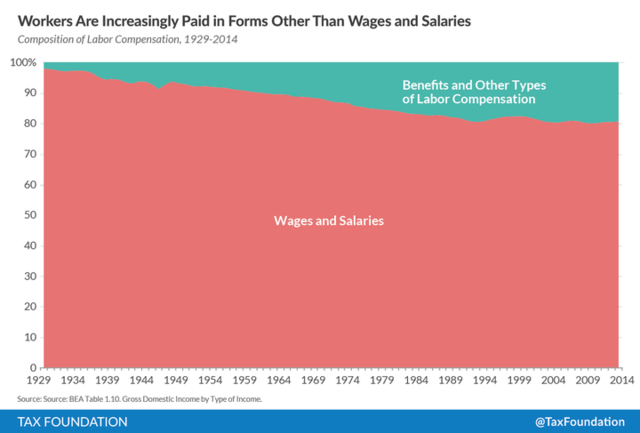 Ultimately, Soled and Thomas conclude, a tax system in which fringe benefits are given a free pass is not sustainable. If many fringe benefits continue to go unreported, more and more employers will offer benefits instead of salaries, federal tax revenues will decline, and the IRS will lose credibility as a fair tax enforcer. Lawmakers should take this problem seriously and begin to craft policy solutions that move towards a neutral treatment of all compensation.

I recall a recent Tax Foundation report where the largest tax expenditure by far is the exemption for employer paid group health premiums.