Princeton/UCLA Study: It Is Time To Ban Laptops In Law School Classrooms

Steven M. Eisenstat (Suffolk), A Game Changer: Assessing the Impact of the Princeton/UCLA Laptop Study on the Debate of Whether to Ban Law Student Use of Laptops During Class, 92 U. Det. Mercy L. Rev. 83 (2015): 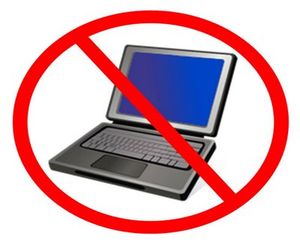 In this Article I discuss the impact on legal education of a recent study conducted at Princeton University and UCLA, which compared the levels of comprehension and retention of class lectures by those students who handwrote their class notes with those students who typed their notes onto their laptops. The study involved three separate experiments. In each test, the subjects using laptops had no access to the Internet, and were only permitted to use their laptops for taking class notes. Thus all possible laptop distractions were eliminated. In all three experiments, those students who handwrote their notes outperformed their counterparts who typed their notes on assessments administered between 30 minutes and one week after the lectures.

This study thus raises another chapter in the continuing debate regarding whether students should be permitted to use their laptops in class. Prior to the Princeton/UCLA study, the debate primarily centered around the distractive effects which laptops had on both laptop users who were engaged in activities unrelated to what was being discussed in class, and on their classmates who were sitting nearby and were distracted by the visuals and sounds emanating from the laptops. Such distractions included surfing the Internet, playing video games, and emailing others in the class.

This study reveals that even if these distractions are removed, students who use their laptops for note taking tend to simply type, verbatim, the words of their professor, without trying to understand the meaning of what their professor is actually saying. As a result, their comprehension and retention suffers.

In light of this study, I suggest in this Article that as legal educators, we need to reevaluate the prevalent policy of allowing students complete access to their laptops throughout every class. I explain why I believe attempts to monitor how students are using their laptops in class, such as professors walking up and down the class aisles to observe what their students are viewing on their computer screens, are ill advised and ineffective. I then suggest that student use of laptops should be permitted in class only if the professor is using them for a specific educational purpose for which the laptop is uniquely designed to serve. Otherwise, the use of laptops should be banned.

In response to those who have argued that most students would not favor such a policy, I offer surveys which I conducted in four of my first year classes, all of which indicate that while at the beginning of the course, a large segment of my students opposed my policy of banning all laptop use; that by the end of the course, that opposition had significantly decreased, while the number of students who ultimately favored the policy markedly increased.

I conclude that given the adverse effects of laptop distractions and note taking, we need to question whether our students are being served by our continuing to permit their use of laptops in our classes. And if, as I argue they often are not, then we need to ban or seriously limit their in class access to their laptops.

Thanks for the honest question, and interesting way to phrase the question. It sounds like you are asking why it is a problem to ban laptops when students used to take notes by hand before laptops. Students and lawyers also used to do all research in the library and not using digital research tools. That doesn’t mean we should throw out digital research just because it wasn’t needed in the past. The question is whether laptops actually are a tool that can enhance learning. Here are the questions that should be examined:

1. Can proper use of a laptop in class enhance learning? (A question that requires research)
2. Is it possible to teach students to use laptops in ways that enhance rather than detract from learning? (current study says they were unable to do so)
3. Even if the majority of students will use laptops poorly, is the utilitarian goal of increasing comprehension sufficient to impose an outright ban that will prevent other students from taking advantage of using laptops as a learning tool? In other words, do we punish those students who do better with laptops because we know that most students will do worse with laptops?
4. Was the original study sufficient to conclude that laptops do, on average, decrease performance? The original study had limited time frames and did not compare long term comprehension and learning.
5. Can we trust anecdotal evidence by professors that laptops have decreased performance? Confirmation and hindsight biases are huge potential problems when listening to professors anecdotal reporting which is why we should do research.

Overall, when I answer these questions I lean toward allowing laptops. I do not see laptops as a huge problem for learning and do not think the utilitarian goal of achieving a moderate performance increase outweighs allowing students to choose their own learning path. My own experiences with my use of laptops may bias me, but, I was someone who never surfed the internet in class and I used my laptop for analytical note taking. Thus, my experience with laptops may be unusual. However, I think the way I used a laptop was a huge educational advantage to taking handwritten notes. I am optimistic that others could be taught to use laptops in the same way.

Hand writing force you to put down processed and aggregated information, and allows you to sketch structures without effort. When typing you struggle to copy all the words, and miss out on the knowledge. Same experience when I follow sports through the viewfinder trying to catch the highlights for the future - I have no idea later if the match was any good

@Dale, I am an example of the forgetting about the code. Sometimes I find myself researching what others have said on an issue, and then think why did I not start with the code.

"This kind of detailed note taking is literally impossible on paper due to the static medium."

" Heaven forfend students type much faster than they write and don't want to spend precious end-of-semester time transcribing their notes into Word..."

Honest question: Do you think students were somehow at a learning disadvantage compared to their peers who were in law school prior to the widespread advent of laptops in classrooms? If not, then what, exactly, is the problem with banning them?

Having taught (and graded final exams and papers) for many years, it has not been my experience that laptops have made the students better learners. My experience has been exactly the opposite and aligns with the paper cited here: no matter how hard students try not to, and no matter how much instruction faculty members give (and I do) about the best way to take notes, the urge to use the laptop solely as a transcription device is simply overwhelming as a matter of human nature under time (and other) pressure.

I used to be a hardass about these smartphones in my accounting classes. But, I gave up for three reasons: (1) the students just ignored my instructions, (2) students feel their phones are an entitlement and get PO'd when you tell them otherwise, (3) 50% of my evaluation is based solely on student evaluations.

That's not all. I used to teach from the tax code because this is how I was taught. Nowadays, it is a rare working professional who knows the code exists, much less uses it as a research tool.

Removing laptops is throwing out the baby with the bathwater. The problem is not with laptops per se, but with distractions and poor use of laptops for note taking. While I was in law school laptops were a huge educational advantage that enhanced my learning and saved huge amounts of time. I took copious notes in Microsoft word before class then used lectures to fill in details I missed, correct mistakes I made, add analysis, and note specific topics focused on in class. This kind of detailed note taking is literally impossible on paper due to the static medium. On paper adding space and editing is impossible. With a laptop I could add comments, insert notes between existing text, and use track changes to see which changes I made during class so I could review why I made mistakes in my initial note taking.

Getting rid of laptops throws out a powerful educational tool. Instead of removing laptops, schools should focus on programs to teach students how to effectively use laptops in class. It should not be overly difficult to train students to not take notes verbatim and instead train them to use laptops for analytical note taking. Professors could even assist students in this endeavor by sending daily class outlines that students could use to frame their note taking before and during class.

FWIW, as a 3L, I'm often browsing your site, Professor Caron, instead of paying attention in class.

Professor Stanley Johanson at UT Law does not permit laptops in his classroom. He has enjoyed excellent student reaction over the years. Of course, he is a first-class teacher.

I cannot tell you how much I love the cognitive dissonance of law professors. It is patronizing to warn 0L's who scored in the 10th percentile on the LSAT about the dangers of excessive student loan debt, but WE MUST BAN LAPTOPS IN CLASS! It's like caveat emptor, but with a twist of totalitarianism. Heaven forfend students type much faster than they write and don't want to spend precious end-of-semester time transcribing their notes into Word...