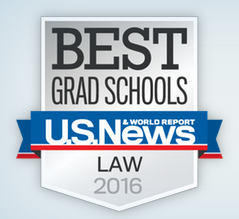 Our investigation into law school admissions practices and trends has sent shock waves through the legal profession. Some law school deans remain in denial, but more (at least privately) want a minority of law schools to stop damaging legal education’s reputation. With no united front among law schools, influential members of Congress waiting to pounce, and the ABA primed to act, it seems the bets some schools made on regulatory inaction were misplaced.

One reason these bets may prove lethal is that law schools charge higher prices to those who are more likely to struggle.

This is one particularly egregious artifact of the U.S. News rankings methodology, which affects how law schools allocate scholarship money. Scholarships are predominately provided in exchange for relatively higher LSAT scores and, to a lesser extent, GPAs. While these resources decisions have always been questionable, they become even more ethically dubious as price discrimination shifts even more dramatically towards discounting tuition for those most likely to complete school, pass the bar, and obtain a legal job.

That many of these scholarships are conditional adds an additional layer of moral complexity. A conditional scholarship is one that depends on law school performance, which the LSAT is designed to predict. ... 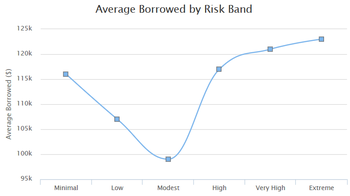 The combined effect of similar prices and more students paying full price at serious risk schools is higher average borrowing. Average borrowing follows a strange pattern (image to the right). The minimal risk schools have higher averages than low risk and modest risk schools, in part because they offer better job prospects. But the average amount borrowed at the high risk schools is higher than the average amount at even minimal risk schools, with the amount increasing at very high risk and extreme risk schools too. So not only are students at these schools less likely to get legal jobs, they’re more likely to accumulate tons of debt, despite facing the longest odds of ultimately obtaining a law license. ...

The risks schools are taking are bad enough, but they’re worse when you account for conditional scholarships, the percentage paying full freight, job prospects, salary prospects, and debt. These factors drive a wedge between reality and claims that serious risk schools are motivated by opportunity rather than survival. It’s not a stretch to see how they make it easier for the ABA and government to act.

It's not the outcomes of the "decent applicants" that bother me.

"I frankly think schools are stupid to offer near full tuition scholarships to candidates in the 3.6/160 range, and would be better off just catering to the paying customers in the 3.3/154 range."

Of course the problem with that is that there aren't nearly enough mid-tier applicants like that to go around; thus the schools must take lower scoring applicants and offset their lower scores by offering scholarships to better scorers.

I am a big critic of law schools, but I have no problem with the current merit scholarship structure. It really just enhances choice. Most applicants will have the option to pay richly for prestige, or pay little for a lower ranked school. In 2006 I would have at least liked to see a price on Yale rather than a rejection. Arguably this system benefits the students the most because any decent applicant will have the chance to attend some school at close to a full ride. I frankly think schools are stupid to offer near full tuition scholarships to candidates in the 3.6/160 range, and would be better off just catering to the paying customers in the 3.3/154 range.

@ Morse Code for J -
I don't think your statement is accurate as I'm sure that many academic scholarships at the undergraduate level are from tuition reductions rather than from externally sourced funds for tuition. In fact, in my experience the majority of merit based scholarships are from internal rather than external sources.

Even if we were to assume, inaccurately, that merit based scholarships are all from external sources, it's not clear to me how the practical economic consequence of those scholarships is any different from what is going on here with these law schools. In both scenarios the least qualified students pay the most for school and ultimately get the least out of it (at least by comparison to the higher qualified students in that same school).

This is why I encourage my children to work hard in school so they'll get more out of their college experience (via higher placement, scholarships, etc.). I think the incentives are actually working in the right direction if the individuals who earn scholarships continue to receive them.

One could argue that this price discrimination (via merit-based scholarships) is actually the best pricing structure for price-sensitive students, who have the ability to apply to a bunch of schools and then consider price differentials when deciding where to attend. Meanwhile there may be some students who are not price sensitive (e.g., someone with a 529 account that's been excessively funded), and charging such a person a high sticker price may be the only way to capture this person's higher willingness to pay (thus subsidizing everyone else).

It's not a merit-based scholarship, in the sense that there is no fixed pool of money outside the school's operating budget to pay the cost of tuition. It is instead a cross-subsidization of tuition for the better-credentialed students by the lesser-credentialed, wherein the first group pays less only because the second group pays more. If the second group's employment prospects weren't so much worse than the first's, perhaps no one would care, but this is a big part of why we are now.

La Verne shouldn't be taking money from 144 and below LSAT scorers.

Two thoughts on the matter. First, LST is doing yeoman's work and it has unquestionably saved careers and helped the lives of hundreds if not thousands of 0Ls. That certain law faculty and admins have written hot pieces on LST and Kyle tells you how influential it is and how loathesome and blind a minority of law school insiders have become.

Second, the problem is not the price discrimination, per se, although I agree with Kyle's predicted political fallout. Instead it is the fact that the bad law school bet aftermath is not borne by the law school or the student. Effectively, it falls on the taxpayer. This makes no sense and only fuels the scam.

I benefited from such discounting in the era between huge tuition increases and when the practice of tuition discounting became ubiquitous. I completely agree that students who are least likely to succeed shouldn't be saddled with the highest debts.

At the same time, I would have never gone to law school at sticker price in the modern era - it just wasn't worth that much to me, and it would have been insane to do so. I paid a reasonable price, even though many paid much more.

The solution, as I see it, is that law school tuition needs to return to some reasonable level. We'll see if that ever happens.

There are exceptions to this - and the University of La Verne's "True Tuition" program is one of them, in which this sort of price discrimination does not occur.

I like Law School Transparency very much and think it's had a very positive meaningful impact at exposing fraudulent and deceptive employment statistics (just look at enrollment and yield numbers). This is important: as we can see, even right now some insiders are continuing to publish deceptive salary statistics -- which is truly shameless and amazing.

However, I don't agree with Law School Transparency on this price-discrimination issue. I think price discrimination in this contexts has pros and cons, and that the pros might outweigh the cons. In any event, this doesn't seem like a worthwhile focal point of evaluating the state of law schools.