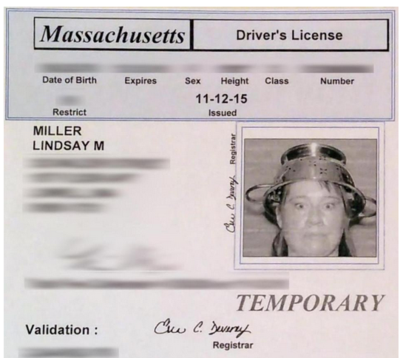 A woman who identifies herself as a Pastafarian, a follower of a religion that teaches that an airborne “spaghetti monster” could have created the universe, has succeeded in her bid to wear a colander on her head in her driver’s license photo.

Lindsay Miller claims the spaghetti strainer is a sign of her devotion to the Church of the Flying Spaghetti Monster.

In August, the Lowell resident was denied a renewed license by the Massachusetts Registry of Motor Vehicles, she said, for wearing the metal cookware. ...

According to the RMV’s website, drivers are barred from wearing hats or head covers in their photos, unless the clothing items are “for medical or religious reasons.”

Miller filed for an appeal immediately after the August incident. Through a friend, she enlisted the help of Patty DeJuneas, a member of the Secular Legal Society, a network of lawyers that assist the American Humanist Association.

DeJuneas said in a telephone interview that every religion deserves protection under the First Amendment, even if others think a certain sect may be “ridiculous.”

“I’m not a Pastafarian. But my understanding, and my view of it, is that it’s a secular religion that uses parody to make certain points about a belief system,” DeJuneas said. ...

The Church of the Flying Spaghetti Monster, according to its website, first “came into the mainstream” in 2005. The international movement, which has its own gospel, says it’s not making an anti-religious statement by advancing a set of outlandish beliefs.

The group, which subscribes to the idea that an invisible creature made from cooked noodles could be responsible for gravity, sells itself as all-inclusive, which attracted Miller in the first place. ...

Miller had spent two months without a license when the RMV suddenly canceled her appeal hearing in October. A second hearing was slated for this week, but officials from the Registry instead contacted DeJuneas on Tuesday, and agreed to allow Miller to wear the colander in her license photo.

“The RMV processed the customer’s request consistent with its established facial image policy,” Michael Verseckes, a spokesman for the Massachusetts Department of Transportation, said in an e-mailed statement.

When asked why the RMV shifted directions, Verseckes said, “We do not get into the sincerity or the veracity of religious beliefs.”

A timely reminder of why we don't want the government involved in ascertaining distinctions in individual's religious beliefs. And why, if this question of religion determined an outcome, it shouldn't have and something is wrong with our laws. Either take their word for what they believe (no matter how absurd), or quit allowing it to make a difference in how people are treated.

At least they don't kill anyone.

As a Pastafarian, I am offended.

My (tax exempt) religion will not be offended (i.e., the whole world must cower in fear of not abiding by my irrational religious peccadilloes).

Please direct yourself to the nearest sensitivity training center for re-education.

Mass. RVM is not doing its job. Next, Ms. Miller will apply for tax exempt status and cite the RVM ruling as evidence.

What can I say?

Perhaps NYU's income from the Mueller Pasta Co. was not UBTI after all.

The government tries to accommodate the deeply held religious beliefs of Sikhs and Muslims, and this clown decides to mock them and to pillory the government for doing so? So she wears a sieve on her head? I guess she showed them.