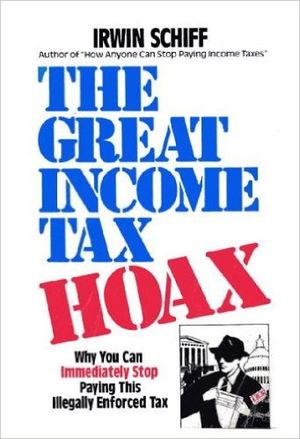 Irwin A. Schiff, who built a national following by arguing that income taxes are unconstitutional and spent more than 10 years in prison for evading them and for helping thousands of others to do the same, died on Friday at a hospital affiliated with a federal prison in Fort Worth. He was 87.

The cause was lung cancer, his son Andrew said.

At his death, Mr. Schiff was an inmate at the Federal Correctional Institution, where he was serving his third prison term, a 14-year sentence handed down in 2005.

Mr. Schiff sold more than 250,000 copies of six self-published books, including How Anyone Can Stop Paying Income Taxes (1980), The Great Income Tax Hoax (1985) and The Federal Mafia: How the Federal Government Illegally Imposes and Unlawfully Collects Federal Income Taxes (1992).

His writings became widely cited in the literature of the so-called tax-honesty movement (tax deniers, to opponents) and of right-wing organizations challenging the legitimacy of the federal government.

It's one thing to believe one's legal argument is sound and another to go to prison for failing to accept losing in court. It appears to me that either Schiff was playing the book salesman or he had some sort of mental illness. If it was the latter, prison was not the right solution. Not that our society has any good answers for mental illness.