As their application numbers collapsed in recent years, a good number of law schools were forced to choose between their academic standards and their finances. With fewer qualified candidates to go around, some decided to shrink their enrollment numbers and forgo a bit of revenue rather than drastically relax their admission criteria. But many others took the path of least resistance, opening their doors to poorly qualified students willing to pay tuition.

As a result, a depressing number of law schools are now filled with students who may simply not belong there. According to a new study released this week by the advocacy group Law School Transparency, there were 37 institutions last year where at least half of all new students scored below a 150 on the Law School Admission Test, or LSAT, up from just nine such schools in 2010. Why is that significant? The group argues that students who fail to break the 150 mark face a "serious risk" of eventually failing their state bar exam once they graduate, which would leave them unable to actually practice law. ...

The Law School Transparency report is an attempt to finally set some public standards for the legal academy. Its risk scale was created by former law professor David Frakt, who developed it based on data from students at Western State College of Law, where he was tasked with improving bar passage rates. When Frakt and I spoke on the phone, he broke it down this way for me: 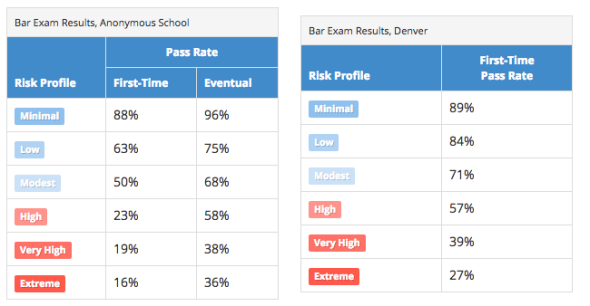 Law School Transparency's argument also dovetails with the simple fact that law grads have been passing the bar at shockingly low rates over the last two years. When the trouble first emerged in 2014, many pinned the blame on a software malfunction that left many test-takers unable to load their essays—a somewhat traumatic event dubbed "barmageddon." But this year, passage rates have continued to decline; among students who took the test this past July, scores on the multiple choice section hit their lowest level since 1988. As Bloomberg noted, that may partly be because the exam has added a new section that made it more difficult. But it's starting to look like graduating law students really might just be "less able," as Erica Moeser, head of the National Conference of Bar Examiners, put it last year. ...

What to do about it? ... [S]omeone will need to force law schools' hands. By now, too many have shown they can't be trusted to protect students' interest on their own.

Sacramento Business Journal, Is McGeorge Admitting Too Many Low-Scoring Students?:

At least a quarter of students in the entering class at McGeorge School of Law in 2014 are considered at high risk of not finishing school or passing the state bar exam, a new study shows.

These students scored below 150 on the law school admissions test, according to the Georgia nonprofit called School Transparency. ...

An admissions test score of 150 is generally considered a dividing line between success and failure. The 25th percentile score for entering students at McGeorge last year was was 148. That’s down from 155 in 2010. Half the students came in at 151, down from 158 in 2010. Students at the 151 mark are considered at “modest” risk of not making it at law school or past the bar.

I mean, I don't think it's necessarily wrong to *admit* students with low test scores, but it's not kosher at all to do so while charging them six figures. (I mean, the price of law school is outrageous even for someone who is likely to pass the bar and become a lawyer, sooo....)

The crucial factor here, as stated, is "transparency." It is true that the LSAT is a good predictor of bar exam success. But for those students, and schools, who believe that some low-scorers not only CAN pass the bar exam, but can contribute to the ACTUAL PROFESSION (which, by the way, does not involve passing multiple-choice or essay exams as a professional function, nor knowing law without access to materials), it is entirely legitimate to take on the mission of helping low-scorers succeed on the bar exam and in the legal profession. (In fact, given the historic discriminatory patterns of the LSAT, and all the reasons why discrimination results in educational deficits, I would argue that it is an important corrective that there be such schools). BUT - and this is important - those schools need explicitly to address these challenges, and be completely upfront with their students about the odds they face.

If some schools do a better job with students who have low LSATs than others that is very important information for prospective students.

Never thought I'd see the day when the greed and ignorance of legal academia would come full circle...but it may be happening. The media has really picked up on the law school tuition crisis (finally!) and if this continues, then there may be a chance of reform. I still can't believe how many faculty either (i) failed to see this coming, (ii) saw it coming and did nothing, or (iii) continue to deny the structural problems facing law schools and the issues created by the high cost of tuition.

The bar exam fluctuates in difficulty by state, so that would not be terribly useful information at the moment. Even states that use the UBE can select their own minimum passing score, meaning that the UBE is more difficult to pass in some states than it is in others.

The bar is what I meant. Happy Halloween yall.

Denver must do a much better job preparing students for the bat than the anonymous law school. No wonder it wants to remain anonymous! Where is "law school transparency" now? Shouldn't applicants be informed about the law schools where they have better and worse odds of bar passage?