Offshore Shell Games 2015: The Use of Offshore Tax Havens by Fortune 500 Companies 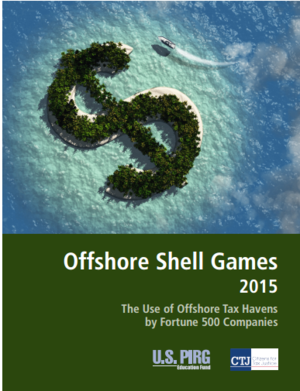 Congress, by failing to take action to end to this tax avoidance, forces ordinary Americans to make up the difference. Every dollar in taxes that corporations avoid by using tax havens must be balanced by higher taxes on individuals, cuts to public investments and public services, or increased federal debt.

This study examines the use of tax havens by Fortune 500 companies in 2014. It reveals that tax haven use is ubiquitous among America’s largest companies and that a narrow set of companies benefits disproportionately.

Most of America’s largest corporations maintain subsidiaries in offshore tax havens. At least 358 companies, nearly 72 percent of the Fortune 500, operate subsidiaries in tax haven jurisdictions as of the end of 2014.

-All told, these 358 companies maintain at least 7,622 tax haven subsidiaries.

Approximately 60 percent of companies with tax haven subsidiaries have set up at least one in Bermuda or the Cayman Islands — two particularly notorious tax havens. Furthermore, the profits that all American multinationals — not just Fortune 500 companies — collectively claimed they earned in these two island nations in 2010 totaled 1,643 percent and 1,600 percent of each country’s entire yearly economic output, respectively.