Big Red Is Really Big Blue: 96% Of Cornell Faculty Political Contributions Go To Democrats; Law Profs Give Most (26%) To Republicans 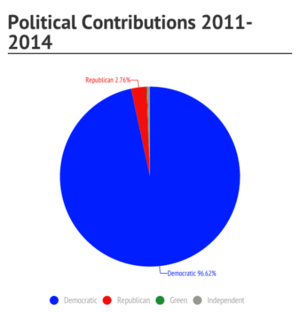 Of the nearly $600,000 Cornell’s faculty donated to political candidates or parties in the past four years, over 96 percent has gone to fund Democratic campaigns, while only 15 of the 323 donors gave to conservative causes.

The Sun’s analysis of Federal Election Committee data reveals that from 2011 to 2014, Cornell’s faculty donated $573,659 to Democrats, $16,360 to Republicans and $2,950 to Independents. Each of Cornell’s 13 schools — both graduate and undergraduate — slanted heavily to the left. In the College of Arts and Sciences, 99 percent of the $183,644 donated went to liberal campaigns. The law school demonstrated the strongest conservative showing, with nearly 26 percent of its approximately $20,000 worth of donations going to Republicans. 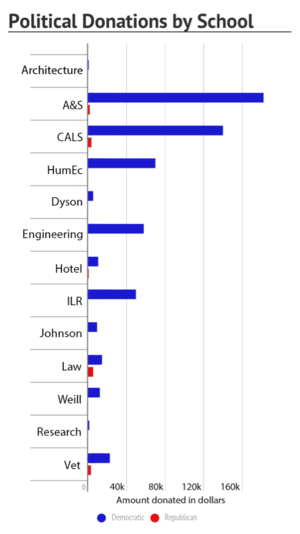 Prof. William Jacobson, law, one of the 15 Republican donors, said that he found the statistics “completely predictable."

"Academia in general leans heavily liberal, and that likely is compounded at Cornell because Ithaca itself is a progressive bubble, surrounded by reality, as the saying goes,” he said. ...

“It is not surprising that faculty at Cornell find the anti-scientific rhetoric of many in the Republican Party to be troublesome,” Prof. Kenneth McClane, English, said. “Many of us here are scientists — we believe in global warming, since we believe what the research tells us.”

Bensel echoed this claim, saying that recent Republican debates have illustrated the deviation of “mainstream conservatives” from views that are widely accepted by intellectuals at reputable universities.

“I think many mainstream Republicans have views that are anti-intellectual and anti-science,” he said. “There are candidates who are creationists, don’t believe in climate change and claim that Obama’s a Muslim. Ted Cruz, for example, should not teach here.” ...

Prof. Andrew Little, government, said that while it would be “nice to have more balance,” he would not advocate compromising the quality of Cornell’s professors, which he suggests would be the effect of seeking out Republican faculty.

“Placing more emphasis on diversity of political beliefs when hiring [would] almost certainly require sacrificing on general quality or other dimensions of diversity,” he said.

Jacobson, on the other hand, said he views the failure to expose students to the conservative viewpoint as one of Cornell’s most striking weaknesses.

“If we value professors not just for their research and publications, but also for the role they serve in mentoring students, then the lack of political diversity among the faculty is a University failure,” he said.

Cornell has a long history of big Republican donors, but more alumni than faculty. Since the alumni have more money, that's not a bad deal for Republicans. A lot more.

With the Kock Brothers and other giving gazillions to Republican causes, there is really no point in Republican Professors giving the odd $50 or $100.

Would we have expected anything different? This is like being surprised that almost everyone receiving an EBT card and other government benefits voted for Democrats.

Higher education is about as nationalized as an industry can get without literally nationalized. Cut government guaranteed student loans and NSF grants, and what's left? Maybe college football.