Yale Law Students Prefer Efficiency Over Equality, Despite Self-Identifying As Democrats Rather Than Republicans By Over 10 To 1 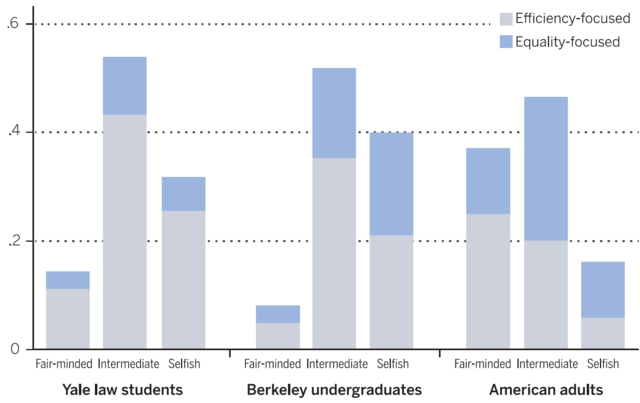 F. Scott Fitzgerald and Ernest Hemingway famously disagreed about the American elite. “The very rich are different from you and me,” Fitzgerald wrote. “Yes,” Hemingway shot back, “they have more money.” With inequality in America continuing to rise, we revisited Fitzgerald and Hemingway’s (perhaps apocryphal) dispute, conducting a series of experiments designed to pinpoint the differences between the rich and those of more modest means.

The conventional view of America as a classless society has long sided with Hemingway—the only difference is the money. But our results suggest that, at least when it comes to attitudes toward inequality, Fitzgerald is right: Elite Americans are not just middle-class people with more money. They display distinctive attitudes on basic moral and political questions concerning economic justice. Simply put, the rich place a much lower value on equality than the rest. What’s more, this lack of concern about inequality among the elite is not a partisan matter. Even when they self-identify as progressive Democrats, elite Americans value equality less highly than their middle-class compatriots. ...

Regardless of party, the elite donors whose money dominates politics, and the elite officeholders whose decisions set policy, don’t value economic equality. When the American government abjures egalitarian policies, it is implementing the bipartisan preferences of the American elite.

The surprise here is that academic researchers have discovered a conflict between the goals of efficiency and equality. Who knew? The authors are on the verge of a second discovery: that people who place a high value on money are more likely to become rich.

I suggest a follow-up paper on whether people who place a high value on physical fitness and tend to be less obese. If that turns out to be the case, I'm sure we can devise a tax on healthy food and exercise to correct the circumferential inequality. Because equality.

When I was at YLS one student told me that sex could be divided into the romantic aspect (obvious) and the administrative aspect (whose house to stay at, what kind of birth control to use, etc.) The student further opined that she generally preferred the administrative to the romantic aspect. I concluded then that Yale was a very weird place, and any research done on Yale students is inherently suspect.