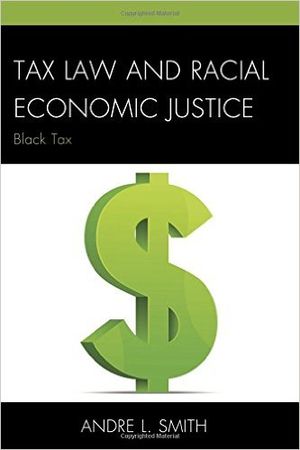 No study of Black people in America can be complete without considering how openly discriminatory tax laws helped establish a racial caste system in the United States, how they were designed to exclude blacks from lucrative markets and the voting franchise, and how tax laws extracted and redistributed vast sums of black wealth. Not only was slavery nearly a 100% tax on black labor, so too was Jim Crow apartheid and tax laws specified the peculiar institution as “negro slavery.” The first instances of affirmative action in the United States were tax laws designed to attract white men to the South. The nineteenth-century Federal Tariff indirectly redistributed perhaps a majority of the profits from slavery from the South to the North and is the principle reason the Confederate states seceded. The only constitutional amendment obtained by the Civil Rights Movement is the Twenty-Sixth Amendment abolishing poll taxes in federal elections. Blending traditional legal theory, neoclassical economics, and a pan-African view of history, these six interrelated essays on race and taxes demonstrate that, even in today’s supposedly post-racial society, there is no area of human activity where racial dynamics are absent.

Andre Smith uses an argument for contextualism as the starting point for a wide-ranging meditation on the centrality of race to taxes, presenting a sustained argument for a more contextualized interpretation of the federal tax code in opposition to the now-dominant textualism. He takes us from the chambers of the United States Supreme Court, where the debate over interpretative methods is raging back to the founding of the country, where he argues that enslaved people had ideas about what direct tax meant, then even further back to ancient Africa, where he explores the centrality of tax to the administration of African kingdoms. He ranges forward to slavery and Jim Crow, showing the many ways that the tax system generated revenue for the state and federal governments off of the labor of people of African descent. Andre Smith has produced a book about the history of taxation as an instrument of white supremacy and he has carried the story down to the present. If you're interested in African American history or in tax this book will open your eyes to important and forgotten parts of our nation's history and where to go now.  Alfred L. Brophy (North Carolina)

Tax and Racial Economic Justice surveys the writings of the past twenty years, adds fresh analysis and puts the lie once and for all to the claim that United States taxation is a race neutral enterprise. A must read for those interested in racial and economic justice Beverly Moran, (Vanderbilt)

How is white racial domination perpetuated, and how can it be ended? For the layperson, the tax system would probably not jump to mind as a prime candidate for either function. Yet in this highly illuminating text, Andre Smith demonstrates the crucial role unfair taxation practices have played from the American colonial period onward in establishing and maintaining white Americans’ illicit material advantage. Anyone interested in racial economic justice needs to acquaint themselves with the less visible but deeply entrenched and effective mechanisms of unjust racial wealth transfer examined in this book. Charles W. Mills (Northwestern)