Law Prof Jobs Are Drying Up 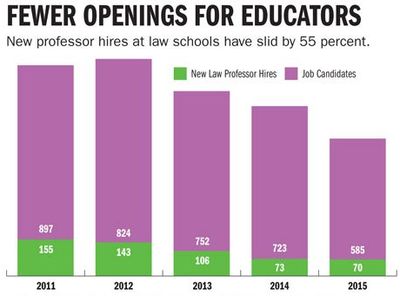 The entry-level law-teaching market — which has always been highly competitive — has constricted dramatically over the past four years, and legal educators said it's not likely to fully recover anytime soon.

The number of new law professors hired at American Bar Association-accredited law schools fell nearly 55 percent between 2011 to 2015, according to data compiled by Sarah Lawsky, a professor at the University of California, Irvine School of Law. Just 70 people snagged tenure-track teaching jobs last year, compared with 155 in 2011, Lawsky's data shows. (The Association of American Law Schools (AALS) organizes the hiring conference but does not track the number of resulting hires, said spokesman James Greif. Lawsky's data, which she posts on the law professor blog PrawfsBlawg, is the most comprehensive available. Lawsky cautions that her numbers are close but not complete.)

"I think it's a really, really tough market," Lawsky said. "I know a lot of wonderful people who haven't gotten jobs."

With a nearly 28 percent decline in students nationwide over the past four years, law schools simply don't need as many faculty members, said University of Chicago Law School professor Brian Leiter, who writes about faculty hiring on his blog Brian Leiter's Law School Reports. With faculty salaries as the single largest operating expense for law schools, they have slashed costs in two ways — buying out existing professors and curtailing new professor hiring. "When you shrink, you have to figure out how to manage the payroll," Leiter said.

"I think it's a really, really tough market," Lawsky said. "I know a lot of wonderful people who haven't gotten jobs."

Welcome to the party.

This is a positive development, but way too many schools are still hiring entry level tenure track professors. I don’t understand how any school outside of the top 15 or so would be in a position to hire. Applications and enrollment are down almost everywhere else. Schools need to adjust to a smaller, more selective student body. The only way to do that is to shrink the faculty headcount. Since schools barely ever fire profs, they have to accomplish this on the front end.

When schools hire too many faculty, they have to market more aggressively to students and they wind up with lower quality. This does not benefit anyone. Realistically, there should only be 20-30 new hires per year.

"The entry-level law-teaching market — which has always been highly competitive — has constricted dramatically over the past four years, and legal educators said it's not likely to fully recover anytime soon."

Wait, I thought the S&M study *proved* such things are impossible?! That's what various anons on these boards keep telling us.

Two questions -- does her data show any differences between top 50, mid-tier, and bottom-tier law schools? And, has the market for laterals changed in a similar way?