Heritage: The Redistributive State — The Allocation Of Government Benefits, Services, And Taxes In The United States

Heritage Foundation, The Redistributive State: The Allocation of Government Benefits, Services, and Taxes in the United States:

Each year, families and individuals pay taxes to the government and receive back a wide variety of services and benefits. A fiscal deficit occurs when the benefits and services received by one household or a group of households exceed the taxes paid. When such a deficit occurs, other households must pay, through taxes, for the services and benefits of the group in deficit. Thus, government functions as a redistributive mechanism for transferring resources between groups in society.

This paper examines fiscal balance in the United States by income class. It estimates the distribution of the full array of government benefits and services including cash and near cash benefits, means-tested aid, education services, and general social services. It also estimates the distribution of all direct and indirect taxes used to finance government expenditure. 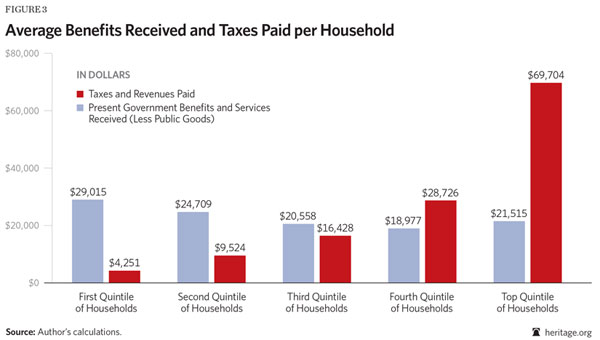 The distribution of benefits, services, and taxes is examined among conventional Census income quintiles of households for the year 2004. Of particular concern is the fiscal balance within each quintile. A quintile is in fiscal deficit if the sum of benefits and services received by households within the quintile exceeds the sum of taxes paid. A quintile is in fiscal surplus if the taxes paid exceed the cost of benefits and services received.