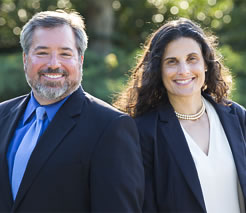 As expected, Jessica Berg and Michael Scharf, who have been serving as acting or interim co-deans since November 2013 following the resignation of former dean Lawrence Mitchell amidst a tawdry sexual harassment scandal and resulting lawsuit (and settlement), have been named permanent co-deans:

"Jessica and Michael worked closely with faculty, staff, students and alumni to create a sense of community and possibility," President Snyder said. "The results have been outstanding, and we look forward to the school's continued progress."

Over the past two years, the school has achieved an all-time record for annual fundraising; moved up nine slots in U.S. News & World Report rankings; and grown the number and quality of student admissions applications.

This month, meanwhile, the school tied with Notre Dame's law school for the 25th position in a ranking of the scholarly impact of the nation's top 70 law schools. Case Western Reserve's position this year is 13 slots higher than in the previous study of faculty citations, completed in in 2012.