The Tax Underpinnings Of The Greek Financial Crisis 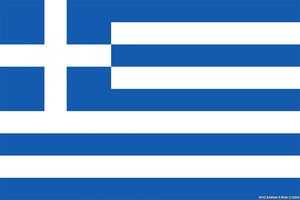 Washington Post, Why Greece and Germany Just Don’t Get Along, in 15 Charts:

Despite a crisis that has sometimes threatened the global economy — and maybe today, still does — Greece and Germany have just not been able to get along. Both certainly understand the ramifications: for Greece, years more of what has already become a Great Depression; and for Germany, its reputation as the linchpin of Europe. ...

The Germans insist on a tough austerity program in order to continue aiding Greece. Syriza says it understands the need to get the country's financial house in order, but demands the flexibility to do so in a way that it feels is right. Whether Greece's voters have truly had enough of Germany's mandates will be revealed Sunday. Here's a guide to the data on why Germany and Greece are such different countries, among the factors that have made it difficult for them to see eye-to-eye on the most important questions facing Europe. ... 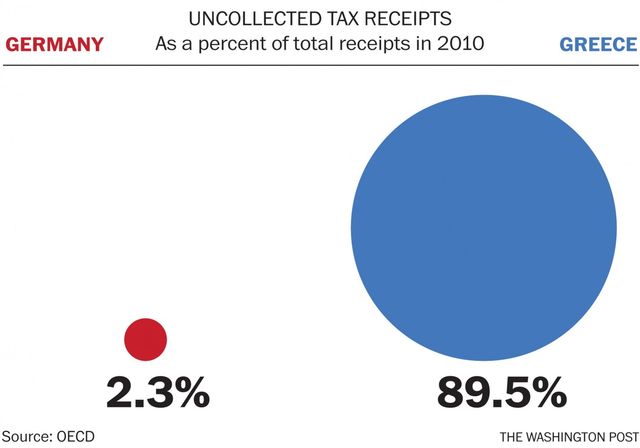 That difference not only helps Germany enjoy a far more fiscally sound position than Greece, but it offers a stark contrast between a disciplined government and one that historically has been hardly disciplined at all.

When trying to make sense of Greece’s long-running inability to balance its books, an easy villain to point out is its citizens’ proclivity for not paying taxes.

Greece’s informal economy, where little in the way of taxes is paid, is about 25%-30% of GDP, according to the best guess of economists who study it. Greece has taken steps to boost tax collections at the insistence of the so-called Troika—the ECB, IMF and European Commission. And it’s easy to see why those creditors, who are keeping the country afloat on loans, would be bothered that Greeks don’t seem willing to fund the government themselves by stepping up and paying taxes. 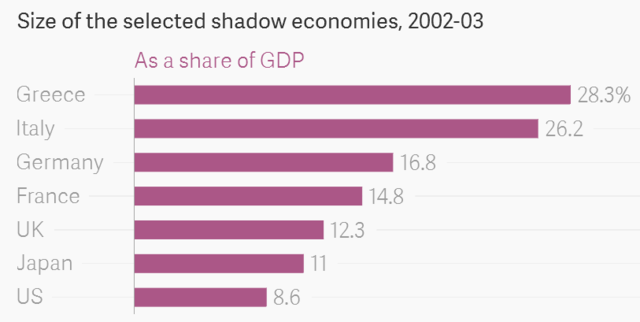 I wonder what China's tax compliance rate might be and the influence of its shadow economy.

I find it shocking that the U.S. "shadow economy" is half the size of Germany's.