The Tallahassee Police Department Violent Crimes Unit, with assistance from the FBI, have been actively investigating the murder of Florida State University Law Professor Daniel Markel since his death on July 18, 2014. TPD is releasing two updates to the case, one focusing on the vehicle specifics and the other focuses on a new reward amount.

Please see the attached images of the suspect car, determined to be a 2006-2009 Toyota Prius. The color is named 'Silver Pine Mica' by Toyota and appears metallic to light green, depending on lighting. The windows of the car are dark tinted. 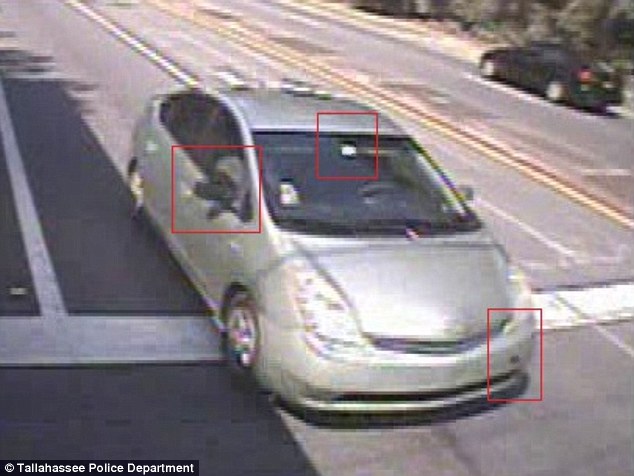 The vehicle has three (3) distinctive characteristics:

This vehicle may have been used to commit this crime without the owner's knowledge.

A Twenty Five Thousand Dollar ($25,000) reward is still available through Crime Stoppers for anonymous tips in this case.

An independent source is now offering a separate reward of up to One Hundred Thousand dollars ($100,000) for information provided directly to TPD that leads to an arrest and conviction of the person or persons responsible for the murder of Daniel Markel. Information can be provided via E-mail to the Tallahassee Police Department Violent Crimes Unit or by calling 850-891-4462.

Daily Mail, New Clue in Murder of Popular Professor: Picture of Suspect's Car Released by Police on One Year Anniversary of His Mysterious Death:

In his first public comments on the murder Markel's father Phillip expressed fears the case will never be solved.

'I know nothing will bring our son back but we would like some closure,' said Phillip Markel in an exclusive interview with Daily Mail Online.

'The investigation seems to have stalled and it is just so frustrating for the family. We want to see the killer caught and brought to justice.'

Mr Markel, who lives in Toronto, Canada, said he has his own theories about who killed his son but said without firm evidence he is not willing to share them.

'It is frustrating as we are at a standstill and that means we cannot have closure and just have to live with it. That is not the best situation.

'I have my own theory who killed Dan, but I do not have the proof and am unwilling to share them.'

Some colleagues had speculated that a posting Markel wrote on his now defunct blog PrawfsBlawg.could have somehow been the key to him being targeted.

Markel was the subject of an anonymous threatening post.

'Bullies like this need to be made radioactive,' a person wrote about Markel's comments.

'Their arrogance and imperiousness speaks for itself. All means necessary must be employed.'

Police have not said if the person who made the post has been traced.

The face of a thin, white woman with dark hair can be seen driving this car when the photo is enlarged. Law enforcement should release an enlarged photo of this woman's face!

The passenger side of the hood looks bent upward.

They were talking about the Prius a year ago.

I never thought that the people who drove Priuses were the same people that owned guns.

I rather think they sat on the info about the car hoping they'd stumble across it, rather than making it public they had a lead on the car and potentially causing the perpetrator to change behaviours as a result.

But then, we're all just speculating, aren't we?

What an awful, awful chain of events. Here's hoping the malefactor is caught.

Soooo, it took the Tallie PD a YEAR to determine, from photographs, that the Prius had an EZ Pass and a different-colored passenger-side outside mirror? That's pretty Keystone...

Alright, I've seen something like this done before, and I'm sure this will help the situation.

There can't be too many silver pine Priuses out there.

The cops think a hit man borrowed/stole a Prius and then shot Merkel and that a possible motive was censorship at prawfsblawg? Seems unlikely, but I guess stranger things have happened.

The prawfsblawg is defunct? They were posting there yesterday.