'Going To Law School Is Becoming A Thing Again'

Following up on my previous post, Light At The End Of The Law School Tunnel?:  Matt Leichter, LSAT Tea-Leaf Reading: June 2015 Edition: 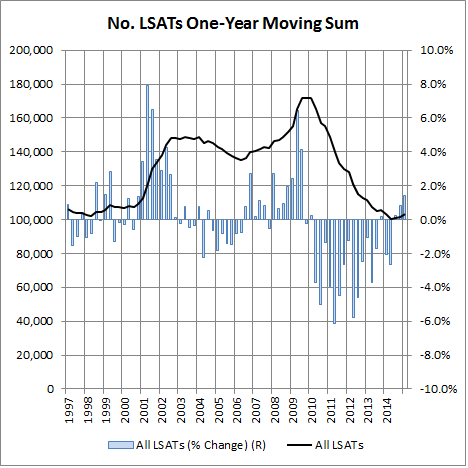 In other surprising news, the number of law school applicants is … about the same as last year. It appears going to law school is becoming a thing again—at least later in the application cycle. Color me baffled as to why this is. A year ago, I predicted the bottom had not been reached, but maybe I was mistaken. Still, I’m left with two thoughts. One, is this just random noise or is it evidence of success for the now-is-the-best-time-to-go-to-law-school-ever crowd? Two if so, will we see change in the distribution of applications as opposed to change in the total number of applicants? More people applying to elite law schools that aren’t hurting while continued problems for those lower down.

Legal educators are cautiously optimistic that the 2015-16 academic year will mark the low point for law school enrollment, and that the number of applicants next year will start to recover from a five-year slide.

"The long, dark days of declines are over, for the time being," said Alfred Brophy, a professor at the University of North Carolina School of Law who tracks law school enrollment. "How much of a turnaround it will be, I don't know. But if I'm a dean, I'm going to the central administration and saying, 'Hey, keep us afloat for a little bit longer. Things are getting better.' "

Two data points fuel their hopes. With the admissions cycle wrapping up, the number of applicants to American Bar Association-accredited law schools declined by a modest 2 percent compared with the previous year — the smallest reduction in four years, according to the Law School Admission Council. The number of applicants fell by more than 10 percent each year from 2011 to 2013. 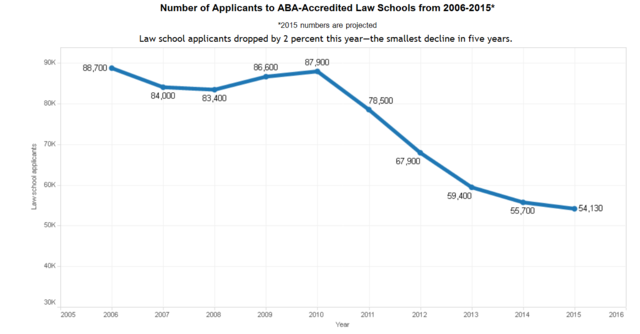 Meanwhile, the number of people taking the Law School Admission Test has increased in each of the three sitting since December — spiking 6.6 percent last month. "Historically, the June LSAT is the start of the new admissions season for law schools, and June along with October have the largest number of first-time test takers," said Jeff Thomas, executive director of prelaw programs for Kaplan Test Prep. "There's reason for optimism."

Brian Leiter (Chicago), It's Official, the Enrollment Decline Is Over!

I wonder what the prediction would be if law schools had to pay back federal student loan money for graduations who can't find jobs?