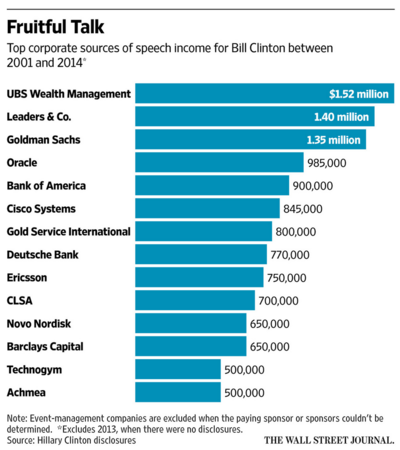 A few weeks after Hillary Clinton was sworn in as secretary of state in early 2009, she was summoned to Geneva by her Swiss counterpart to discuss an urgent matter. The Internal Revenue Service was suing UBS AG to get the identities of Americans with secret accounts.

If the case proceeded, Switzerland’s largest bank would face an impossible choice: Violate Swiss secrecy laws by handing over the names, or refuse and face criminal charges in U.S. federal court.

Within months, Mrs. Clinton announced a tentative legal settlement—an unusual intervention by the top U.S. diplomat. UBS ultimately turned over information on 4,450 accounts, a fraction of the 52,000 sought by the IRS, an outcome that drew criticism from some lawmakers who wanted a more extensive crackdown.

From that point on, UBS’s engagement with the Clinton family’s charitable organization increased. Total donations by UBS to the Clinton Foundation grew from less than $60,000 through 2008 to a cumulative total of about $600,000 by the end of 2014, according to the foundation and the bank.

The bank also joined the Clinton Foundation to launch entrepreneurship and inner-city loan programs, through which it lent $32 million. And it paid former president Bill Clinton $1.5 million to participate in a series of question-and-answer sessions with UBS Wealth Management Chief Executive Bob McCann, making UBS his biggest single corporate source of speech income disclosed since he left the White House.

There is no evidence of any link between Mrs. Clinton’s involvement in the case and the bank’s donations to the Bill, Hillary and Chelsea Clinton Foundation, or its hiring of Mr. Clinton. But her involvement with UBS is a prime example of how the Clintons’ private and political activities overlap.

UBS is just one of a series of companies that engaged with both the Clinton family’s charitable organization and the State Department under Mrs. Clinton. And it is an unusual one: Unlike cases in which Mrs. Clinton went to bat for American companies seeking business abroad, such as General Electric Co. and Boeing Co. , the UBS matter involved her helping solve a problem for a foreign bank—not a popular constituency among Democrats—and stepping into an area where government prosecutors had been taking the lead.

The flood of donations and speech income that followed exemplifies why the charity and its fundraising have been a running problem for the presidential campaign of Mrs. Clinton, the Democratic front-runner. Republicans as well as some Democrats have raised questions about potential conflicts of interest.

“They’ve engaged in behavior to make people wonder: What was this about?” says Harvard Law Professor Lawrence Lessig, who is a Democrat. “Was there something other than deciding the merits of these cases?”

Critics also have hit the charity for accepting donations from foreign governments, which they say could pose problems for her if she is elected, potentially opening her to criticism that she is obligated to foreign donors. ...

In a CNN interview last month, Bill Clinton was asked if any foundation donors ever sought anything from the State Department. “I don’t know,” he replied. “I know of no example. But I—you never know what people’s motives are.”

The first thing I was taught as a young (and very naive) IRS auditor: follow the money.

It's too bad Ms. Clinton is circling the drain. She's the best candidate the Republicans have.