The Constitution vests all legislative powers in Congress, yet Congress grants expansive lawmaking authority to federal agencies. As positive political theorists have long explored, Congress intends for federal agencies to faithfully exercise their delegated authority, but ensuring fidelity to congressional wishes is difficult due to asymmetries in information, expertise, and preferences that complicate congressional control and oversight. Indeed, this principal-agent problem has a democratic and constitutional dimension, as the legitimacy of administrative governance may well depend on whether the unelected bureaucracy is a faithful agent of Congress. Despite the predominance of lawmaking by regulation and the decades-long application of principal-agent theory to the regulatory state, we know very little about how federal agencies interpret statutes.

This Article looks inside the black box of agency statutory interpretation in the rulemaking context. The Article reports the findings of a 195-question survey of agency rule drafters at seven executive departments (Agriculture, Commerce, Energy, Homeland Security, Health and Human Services, Housing and Urban Development, and Transportation) and two independent agencies (the Federal Communications Commission and the Federal Reserve). Of the 411 officials sent the survey, 128 responded, and their answers shed considerable light on the tools and approaches they use to interpret statutes and draft regulations. The findings uncovered challenge some theories on agency interpretation while reinforcing others. As Congress, courts, and scholars gain more insight into how federal agencies use the canons, legislative history, and judicial deference doctrines in agency statutory interpretation, the relationship between Congress and federal agencies should improve, as should the judicial branch’s ability to monitor and faithfully constrain lawmaking by regulation. 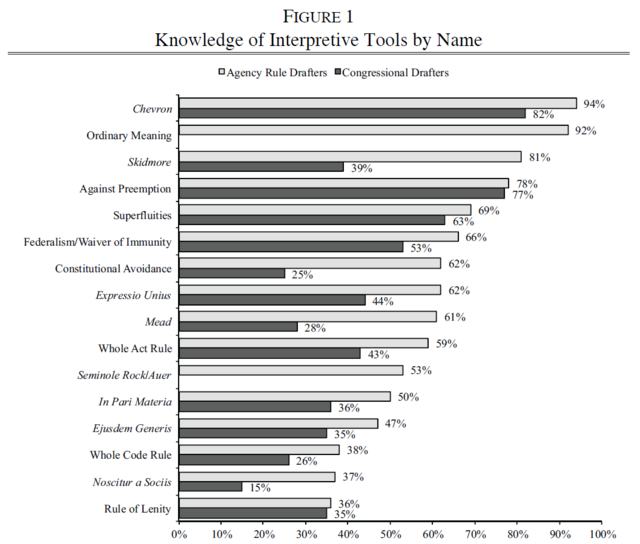