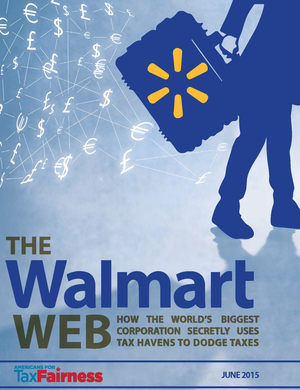 Wal-Mart Stores Inc. owns more than $76 billion of assets through a web of units in offshore tax havens around the world, though you wouldn’t know it from reading the giant retailer’s annual report.

A new study has found Wal-Mart has at least 78 offshore subsidiaries and branches, more than 30 created since 2009 and none mentioned in U.S. securities filings. Overseas operations have helped the company cut more than $3.5 billion off its income tax bills in the past six years, its annual reports show.

The study, researched by the United Food & Commercial Workers International Union and published Wednesday in a report by Americans for Tax Fairness, found 90 percent of Wal-Mart’s overseas assets are owned by subsidiaries in Luxembourg and the Netherlands, two of the most popular corporate tax havens.

Units in Luxembourg -- where the company has no stores -- reported $1.3 billion in profits between 2010 and 2013 and paid tax at a rate of less than 1 percent, according to the report.

All of Wal-Mart’s roughly 3,500 stores in China, Central America, the U.K., Brazil, Japan, South Africa and Chile appear to be owned through units in tax havens such as the British Virgin Islands, Curacao and Luxembourg, according to the report from the advocacy group. The union conducted its research using publicly available documents filed in various countries by Wal-Mart and its subsidiaries. 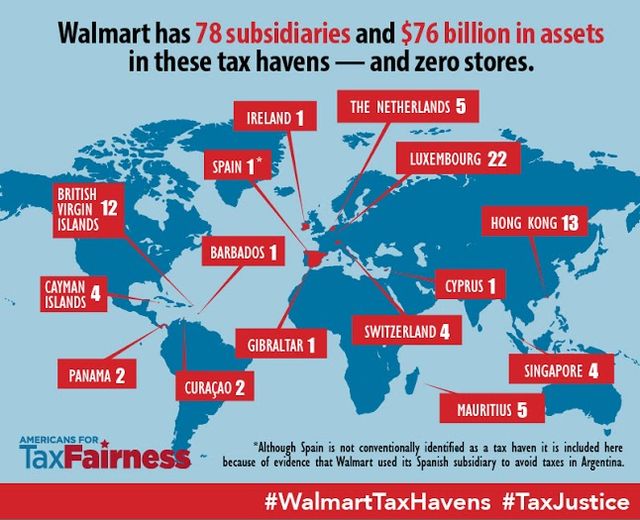 So, what's the point? Are they saying WalMart should have not taken advantage of our stupid tax laws and paid roughly $24 B in taxes on this money? And how would paying this tax benefit WalMart employees?