As the cost of law school rises and the number of entry-level legal jobs stagnates, the number of law-school applicants continues to fall.

According to the latest numbers from the Law School Admission Council, 50,269 people submitted applications to nationally accredited law schools as of last week, down 2.5% from the same time last year. Those would-be lawyers applied to an average of more than six schools per person, and the total volume of applications was down 4.6% from 2014. At this point in the year, LSAC says it usually has around 95% of the year’s data collected. 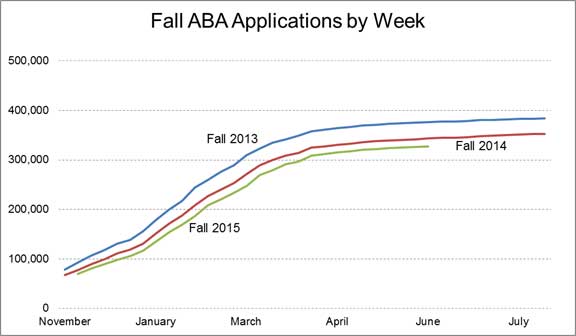 Al Brophy (North Carolina) believes that applications have hit the bottom and stabilized after years of declines, with enrollments projected at 36,000 for the incoming class. As a result, he predicts that "things are unlikely to get worse" and that no more than a dozen law schools will close:

For me one of the continuing questions is what does this decline in applicants mean for the fortunes of law schools. How will they adjust to the substantially smaller classes? And I've got to think that the decline in revenue will be greater than just the smaller number of students would suggest, because those attending will have more leverage in negotiating for financial aid. Schools are proving remarkably resilient, but perhaps we'll see some more closures (or mergers). (Though as close readers may recall, I think schools have a ways to go before they have to close.) Faculty salaries I should imagine will shrink. The easiest to cut are summer research grants, which I intuit are already on the way out at many schools. But I should also imagine that salaries are going to decline, too.

I think deans who are pleading the case of their schools to central administrations will use what appears to be a stabilization of applications as a sign that things aren't going to get a ton worse. They may not be improving any time in the near future, but if I were a dean involved in tough conversations about the future with my central administration I'd be arguing that applicants are stabilizing and that things are unlikely to get worse. That may not be good enough for some central administrations. My guess is that we're not going to see more than a dozen or so law schools close and that all of those will be in the "rank not published" tier of U.S. News.

I know two law school students who just graduated with honors from Fordham and Columbia in the past few weeks. They are up to their eyeballs in debt and no job prospects in sight.

Nationwide, families of prospective law school students have heard about the lack of law employment and the crushing debt. The current view on law school is that if monetary success is what you are after, chose a different field. Otherwise, you will be saddled with debt you can never hope to pay off but you get a tell folks you have a J.D. like a cool character on a TV show.

By hitting the bottom, does he mean that law schools are now scraping the bottom of the barrel for qualified students? One hopes that the bottom of the applicant pool stops applying, once they realize these schools are going to take 150k from them, give them some semblance of legal education, and then leave them to rot as at best doc review attorneys and at worst unlicensed deeply indebted unemployed people.

Another item to remember: as the window of the boom years of LSAT closes and those scores expire, the scores of applicants necessarily become less favorable to schools. I.e., as fewer high scores remain useful--there were naturally more higher scores when there were more LSATs taken—mid-tier schools with some standards will continue to be between a rock and a hard place.

As some of those candidates seized the opportunity to go to a better school recently; lower schools either dug deeper, or conceded medians. This will not be as significant as the LSAT taker pool shrinks.

TL;DR: Even if the number of matriculants drops in line with applications, the percentile drop in LSATs will likely outpace the percentage drop in students.

I am not sure this captures it all. If applications are stabilizing it could because the cost of the investment is less. An argument that stabilization justifies increased public investment hopefully will be met with two questions by any thinking university presidents. Is the stabilization the result of greater subsidization. If so, that will always be the case and the argument becomes circular. The more important question is what is the return on the public investment. What do we tell the involuntary tuition payers is in it for them?