TIGTA: 61% of IRS Employees Who Cheated On Their Taxes Were Allowed To Keep Their Jobs

The Treasury Inspector General for Tax Administration yesterday released  Review of the Internal Revenue Service’s Process to Address Violations of Tax Law by Its Own Employees (2015-10-002):

According to Section 1203 of the IRS Restructuring and Reform Act of 1998 (RRA 98), the IRS shall terminate employment of any IRS employee if there is a final determination that the employee committed certain acts of misconduct, including willful violations of tax law, unless such penalty is mitigated by the IRS Commissioner.  As the agency primarily responsible for administering Federal tax law, the IRS must ensure that its employees comply with the tax law in order to maintain the public’s confidence.

TIGTA reviewed records for cases closed in Fiscal Years 2004 through 2013 (prior to the term of the current Commissioner). For this period, IRS records show that 1,580 employees were found to be willfully tax noncompliant. While the RRA 98 states the IRS shall terminate employees who willfully violate tax law, it also gives the IRS Commissioner the sole authority to mitigate cases to a lesser penalty. Over this 10-year period, 620 employees (39 percent) with willful tax noncompliance were terminated, resigned, or retired. For the other 960 employees (61 percent) with willful tax noncompliance, the proposed terminations were mitigated to lesser penalties such as suspensions, reprimands, or counseling. 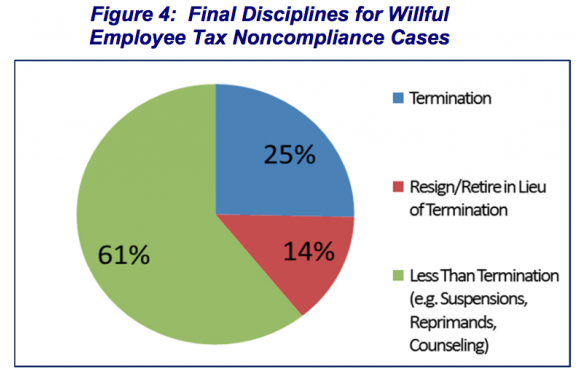 TIGTA’s review of a judgmental sample of 34 cases of willful tax violations found that employees with similar violations received different discipline. In cases that were mitigated, files included mitigating factors as well as evidence that violations of tax law were willful; however, the basis for the Commissioner’s decision to mitigate was not clearly identified in the case files. Some employees had significant and sometimes repeated tax noncompliance issues, and a history of other conduct issues. Moreover, management had concluded that the employees were not credible. Nonetheless, the proposed terminations were mitigated by the IRS Commissioner. These cases included willful overstatement of expenses, claiming the First-Time Homebuyer Tax Credit without buying a home, and repeated failure to timely file required Federal tax returns.

I'm shocked, absolutely shocked, to discover that they fired anyone at all.

We should extend the law to include all federal employees. Then we might get rid of 39% of the crooks in other agencies too.

By the way--- does anybody know of a good history of the Truman Scandals at the IRS? Googling, I could barely find mention of it, but apparently a number of high tax officials were convicted, despite initial lack of cooperation from the Administration.

Cannot believe people care that much about the peons at government agencies. I am far more concerned about the actions/influence of the puppet-masters and financiers of our government. I don't really care if Deb at the IRS call center tried to get a bigger refund.

For those of you who aren't in the know... the main reason, these days, that those employees weren't terminated is that they can't hire replacements for them.