Daniel Shaviro (NYU), The Crossroads Versus the Seesaw: Getting a 'Fix' on Recent International Tax Policy Developments: 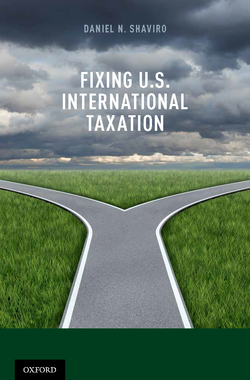 U.S. international tax policy is at a crossroads, say those who urge the United States to adopt what common parlance would call a territorial system. They argue that one of the two ways forward they identify – trying to fortify the current U.S. system – would lead to ever-costlier outlier status for our tax system, and ever-declining competitiveness for U.S. multinationals. They therefore urge U.S. policymakers to embrace what they identify as the other way forward: conforming to global norms by adopting a territorial system.

An alternative metaphor to that of the crossroads, more likely to appeal to proponents of addressing stateless income than to pro-territorialists, is that of the seesaw. Under this view, while policymakers in OECD countries may long have deliberately tolerated profit-shifting by multinationals – perhaps as an informal way of lowering effective tax rates for these often highly mobile taxpayers – at some point they became convinced that it had gone too far. Thus, proponents of restricting stateless income want to tip the balance somewhat (but not too far) back in the other direction. For example, they may want to ensure that each increment of a multinational’s global income will be subject to tax somewhere – but just once, rather than either zero times or twice, under what has been called the “single tax principle.”

In my 2014 book Fixing U.S. International Taxation, I tried to offer a better analytical framework for international tax policy than either of the above. The concepts that I hoped to sideline or even banish included not only the single tax principle, along with the “worldwide versus territorial” framework – which I disparaged as conflating multiple margins, even leaving aside countries’ hybridity in practice – but also normative reliance on the whole rancid “alphabet soup” of single-margin neutrality benchmarks such as capital export neutrality (CEN), capital import neutrality (CIN), and capital ownership neutrality (CON).

A number of important things have happened in international tax policy since Fixing went to press. For example:

This paper offers a brief review of how the main principles I advanced in Fixing, as proposed substitutes for the standard “worldwide versus territorial” framework, relate to, and may help us in evaluating, these recent developments.