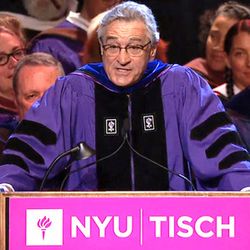 Hollywood heavyweight Robert De Niro delivered a heavy dose of reality to graduates of New York University’s Tisch School of the Arts — telling them, “You made it. And, you’re f–ked.”  ...

Other NYU grads had brighter prospects, he added.

“The school of medicine graduates, each will get a job,” he said. Law school grads will too, he said, adding that if they don’t, “Who cares? They’re lawyers!”

Here's an arrangement so that no graduate will be offended by commencement speakers.

“Each of the speakers will be given a podium and will have approximately 20 minutes to simultaneously deliver their remarks to their respective student, at which point the ceremony will conclude. We believe this arrangement will guarantee that none of our students will be forced to contend with disagreeable opinions while observing this momentous milestone.”