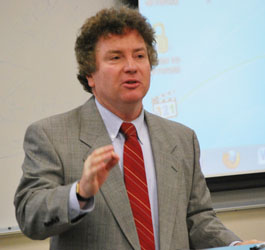 A federal judge has allowed a lawsuit brought by a professor at the Ohio Northern University Pettit College of Law against the university and a colleague to move forward.

Professor Scott Gerber filed suit in U.S. District Court for the Northern District of Ohio in December 2014, claiming faculty members had bullied him for years and retaliated against his for seeking redress. He also claimed the university mishandled his retirement account and owes him money as a result.

“Not every workplace dispute gives rise to a federal case,” Zouhary wrote. “Certain of Gerber’s claims deserve further consideration; others do not.” The judge dismissed claims for breach of contract; intentional infliction of emotional distress; and retaliation. He allowed claims for assault and battery; negligent retention and supervision; and under the Employment Retirement Income Security Act. ...

Gerber joined the faculty in 2001 and earned tenure in 2007. But shortly thereafter, he began butting heads with professors and a former dean, according to the court ruling.

Gerber claims law school administrators unilaterally overruled one of his grading decisions and dragged their feet in writing recommendation letters in his search for a job at a different law school.

In 2009, the law school named a fellow professor to a chaired position that Gerber had held the previous two years. Gerber claimed failure to follow proper procedure but administrators overruled him.

Gerber also claimed that professor Stephen Veltri hit him with his office door in 2007 and in 2012 grabbed and squeezed his shoulder during an argument, causing long-term pain. Gerber eventually reported the 2012 incident to the Occupational Safety and Health Administration, the American Bar Association and local police, according to the ruling. ... [T]he judge found enough evidence to allow the assault and battery claims against Veltri to stand. “Accepting as true the complainant’s allegations, a reasonable person could find Veltri’s alleged conduct offensive—tightly grabbing and squeezing the shoulder of another person during a heated argument,” Zouhary wrote.