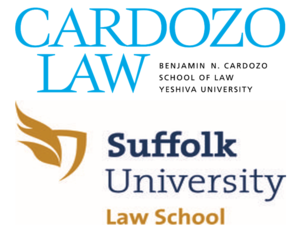 Vice dean Melanie Leslie will become dean of the Yeshiva University Benjamin N. Cardozo School of Law on July 1 as the school’s first female leader. And Suffolk University Law School has selected professor Andrew Perlman as its dean, effective on Aug. 1. Perlman will replace Camille Nelson, who has led the school for five years. ...

Perlman will also have to shepherd the Boston law school through turbulent times as interest in law degrees wanes nationwide. The number of incoming students at Suffolk fell by more than 21 percent between 2011 and 2014, according to ABA figures. The school in September offered buyouts to all faculty members, and Perlman said full-time faculty strength has declined by one-third during the past five years.

“I do believe the numbers the past were concerning, but we’re seeing an increase in the number of applications and in applicant credentials, which is encouraging,” Perlman said. “I feel that we’ve turned a corner, not just at my school but nationally.”

Suffolk plans to reduce its incoming class to 300 next fall, from more than 400 at present, becoming more selective and admitting students with higher LSAT scores, he said. Reducing the class size will help the school remain financially sustainable and likely improve employment outcomes and bar passage rates, he added.

Cardozo faces some of the same enrollment pressures as Suffolk, although to a lesser degree. New student enrollment fell by nearly 12 percent between 2011 and 2014, and its 25th and 75th LSAT percentiles dropped three points in that time.

Leslie expects next year’s incoming class to be slightly smaller, but did not provide a target class size.