The Crimson, Harvard Faculty Donate to Democrats by Wide Margin:

Eighty-four percent of campaign contributions made by a group of 614 Harvard faculty, instructors, and researchers between 2011 and the third quarter of 2014 went to federal Democratic campaigns and political action committees, according to a Crimson analysis of Federal Election Commission filings.

During the three years, the Harvard affiliates represented in analyzed public filings gave nearly $3 million to federal campaigns and candidates. Each of Harvard’s schools leaned to the left in the contributions made by their affiliates, many by wide margins. Ninety-six percent of donations in the data set from the Faculty of Arts and Sciences, which includes Harvard College, supported Democratic efforts. That figure was even higher—nearly 98 percent—at Harvard Law School. Harvard Business School was the most Republican, with 37 percent of its contributions supporting Republicans and 62 percent going to Democrats. 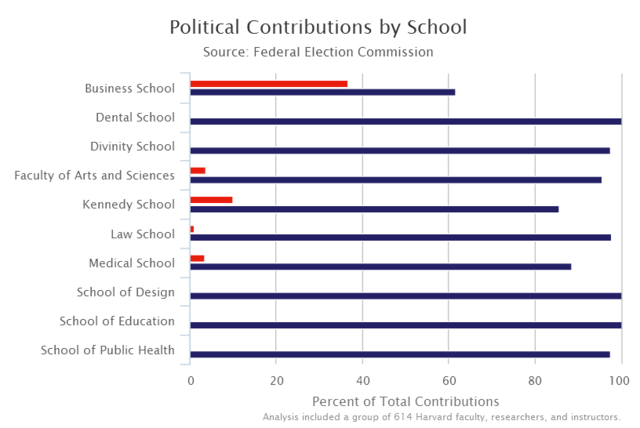 "Headline should be "Most Harvard Faculty Couldn't Give a Crap About Politics"."

So 614 people out of the the 10,000+ who work at Harvard donated to either Republicans or the Democrats?
http://www.harvard.edu/harvard-glance

Headline should be "Most Harvard Faculty Couldn't Give a Crap About Politics".

Also, these figures really should just include faculty, and tenured faculty should be separated out. I, myself, am a Harvard Law researchers, but I don't belong in the same category with permanent faculty. I might even be the 2%.

Smart people. What can I say?

The Harvard Law School obviously values diversity in their hiring.

I'm moderately surprised that only 2% of HLS faculty contributions went to the Greens. Thought it would be higher.