The Smartest People Are Opting Out of Law School

As schools grapple with a persistent slump in young Americans’ interest in legal education, the programs seem to be compensating for their sudden unpopularity by taking in people who wouldn’t have made the cut five years ago. As of March 2015, about half as many students with scores of 165 and above on the LSAT have applied to law school as did in 2010, according to a new analysis of the latest numbers from the Law School Admission Council, which administers the test. LSAT scores range from 120 to 180. Applications from students with lower scores are falling, too, but not nearly as sharply, as the second chart below shows. 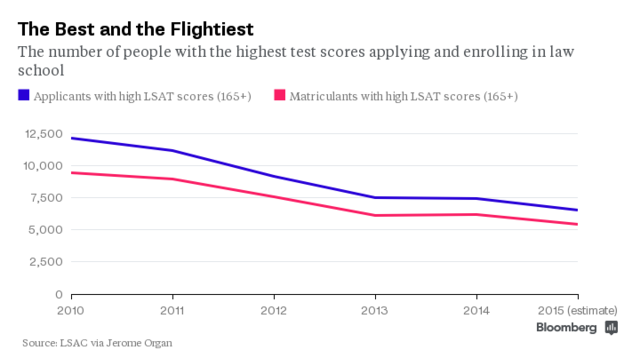 The disenchantment with law school on the part of the people most likely to get in shows up in the classroom head count, too: Around 5,400 people with the highest scores will enroll in law school this year, down from 9,400 in 2010, according to Jerome Organ, the University of St. Thomas School of Law professor who parsed the numbers.

Even as applications fall across the board, a growing number of people with low scores are expected to show up to class. Some 8,700 low-scoring students will likely start law school in 2015, up from 7,000 in 2010, according to Organ, who looked at LSAC data on the number of applicants as of March 6, 2015, and projected how much the pool would grow and how many would matriculate, based on averages from the previous three years. 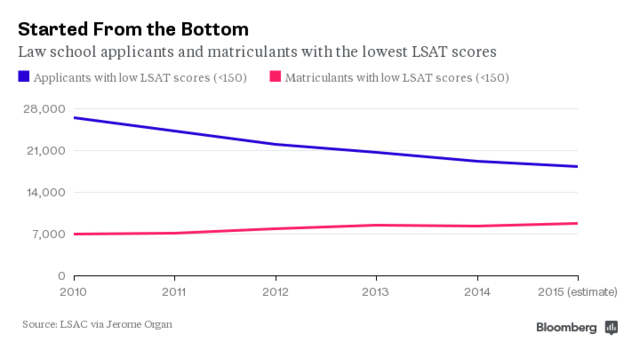 “The top is eroding and the bottom is growing,” says Organ, adding that schools risk churning out graduates with less of a shot at becoming lawyers. "Four years from now, when those people graduate and take the bar, you'll have a much smaller percentage who are likely to pass the bar and a much larger percentage that are likely to fail." Research has shown that LSAT scores generally correlate with success during the first year of law school and with scores on the bar exam.

Bob Dylan: Lilly Rosemary and the Jack of Hearts:

" Anyone with any sense had already left town"

Law school is fool's gold and has been for some time.

A fair reading of S&M's study, is that for individuals who graduated for law school prior to 2008, on average he/she had lifetime gross earnings that exceeded those of a bachelors' degree holder (assuming similar quartile) and ignoring the cost of tuition and financing tuition.