Muller: Number Of Law School Applicants Has Bottomed Out, But Quality Of Applicants Continues To Plummet 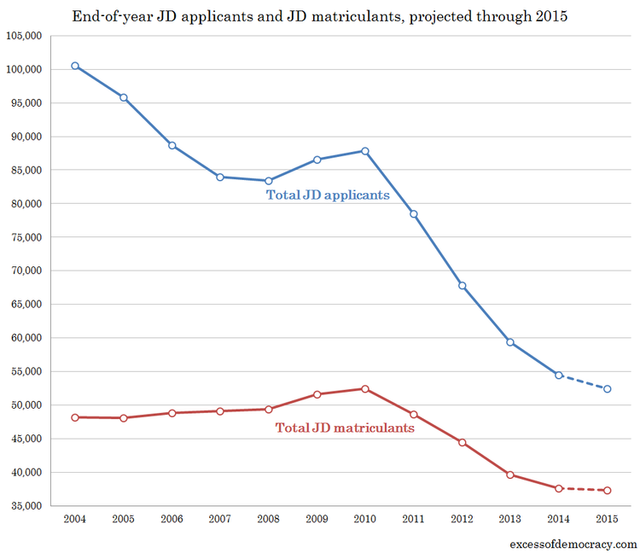 But the bad news is [] the quality of the applicants. In short, the wrong sort of applicants are applying. ...

The only places that have seen an increase in applicants are those scoring a 144 or lower.  Applicants scoring a 145 to 149 are largely flat. In contrast, applicants with a high score of 165 or higher are down double-digits, with the steepest decline among the most elite applicants. ... [See chart here.]

So the first level of data tells us some good news for law schools--applicants are not down as much as one might have feared, and the bottom may be approaching. But the second level of data tells us some bad news--applicant quality has worsened, in such a way that law schools are still confronted with as difficult a choice as if they had simply experienced an overall drop in applicants. How schools react remains to be seen.

This will be reflected in employment rates and bar failure rates.

There are more applicants with LSAT scores <145 than there are with scores >160. What a mess!

It's a good thing law degrees are a completely homogenous positional good and everyone ends up making the same wage premium over college graduates (who also possess monolithic, indistinguishable degrees) regardless of aptitude, rank, LSAT, law school GPA, whether they pass the bar or not, and whether they practice or not, amirite? Hey, who stole my can openers?

Getting back to the land of reality, the reaction of law schools to diminishing academic prowess in their student bodies has already been established: challenge the usefulness of the bar exam, and in particular, the MBE.