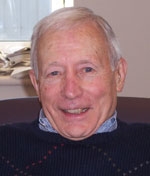 Chuck Davenport died last week.  I admired him greatly.  Chuck was the senior tax law professor at Rutgers-Newark when I was on the entry-level market for legal academics.  When I visited Newark for my job talk, Chuck came to the small dinner the night that I arrived, and I immediately knew that I had met a kindred spirit.  It was clear that we were politically similar (for example, he positively compared my thinking with that of John Kenneth Galbraith -- a generous compliment that would turn anyone's head!), but that was not what really mattered.  Chuck was just so easy to like.

Upon my joining the Rutgers faculty, Chuck agreed to be my official senior faculty mentor.  He had already become my mentor unofficially, so this really changed nothing.  Even so, it meant that he was willing to put his considerable reputation behind my emerging career, which changed things quite a lot.  After I left Rutgers, Chuck and I stayed in touch, getting together for a few lunches and dinners over the years.  He always asked to read the drafts of my latest work, insisting modestly that he probably would not understand it, but then offering extremely helpful insights.

Remembrances of departed law professors often focus on descriptions of high-impact scholarship, important cases argued and briefs filed, and so on.  This is important, especially when celebrating people who have devoted their lives to improving the world through that kind of work.  As important as that is, however, I will leave it to others.  The most important thing to remember is that the departed were first and foremost people.  Chuck was a person, a human being, a mensch.  He cared deeply about social justice as a legal and academic matter, but he also cared about being kind, friendly, and helpful.  He was understated and funny, with a dry sense of humor and a twinkle in his eye that always let people know that he was happy to be spending time with them.  He never took himself or the world too seriously.

Chuck was my senior colleague at Rutgers Law School (Newark) and a wonderful wonderful man.  Rutgers at that time was pretty tumultuous place, and Chuck was glorious refuge.  We got to digest the tax news for half-hour to forty-five minutes a day.  Before his coming I could find no one who was willing to tolerate tax talk.

Davenport had gone from Chico State College to Harvard Law School under a Harvard program to recruit rural applicants –- the Admissions office always knew who he was.  Before coming to Rutgers, he had been in Tax Legislative Counsel under Stanley Surrey and Jerome Kurtz.  His service overlapped with Tom Field, who left Treasury to found Tax Notes and Tax Analysts.  For years, Chuck did the final read of the weekly Tax Notes, teaching both copy editing and tax concepts.

Just before coming to Rutgers he had been the inaugural assistant director of the Congressional Budget Office, under Alice Rivlin as director.  CBO was set up to give counterweight staff expertise against Nixon’s OMB, when Nixon claimed the power to impound Congressional appropriations on programs he did not like.  Chuck led a tax staff of 14(?) professionals, half lawyers and half economists.   “If one of our draft reports,” he said, “had had a printing glitch that put the tables from one report into the prose of the other, neither group would have noticed it.  The economists read only the tables and considered the prose to be sludge not worth the time.  The lawyers never read tables.  Nobody would have seen the mismatch.”

A wonderful wonderful man and now there is nothing that I can do to repay him for all the support.  I shall just have to pass the good on, and perhaps try to amplify it a bit as comes through me.

He was truly a wonderful man. I was lucky to have him for a seminar at Newark law.