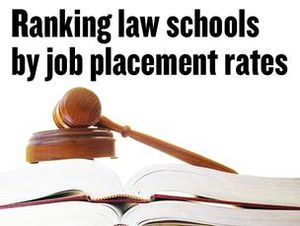 I thought I'd recreate last year's data on California law school employment outcomes, with a couple of tweaks due to external changes.

Below is a graph of the unfunded and funded full-time, long-term, bar passage-required and J.D.-advantage positions.

The chart below that reflects the same data, with the 2016 USNWR peer score, the full-time, long-term, bar passage-required and J.D.-advantage positions, along with year-over-year increase or decline in points from the 2013 rate. It then lists the raw number of students who obtained such positions, along with a parenthetical notation of how many of those positions were school-funded. The same is listed for 2013. [See charts here.]

Wow, UC Irvine doubled down on the funded positions, huh? Funny thing is that it's too late since they won't get the rankings benefit given U.S. News' recent methodology shift.

Interestingly, when you subtract out the 13 folks reported as employed in school-funded full time, long term, Bar required or JD advantage positions, you see a very different picture of UC Irvine's (and the other schools' with high funded positions) placement in "real" full time, long term Bar Req'd/JD advantage jobs: a modest 70.96% (79 - 13 = 66 / 93 = .7096).

UCI, in true law school form, features the 86% "employed" figure prominently on its web site, requiring detective work and knowledge of the funded position scheme to get at the "real numbers." Also, it appears that there is no info regarding what those funded jobs pay, or consist of, from what I can tell.

Nothing against UC Irvine per se, other schools are doing the same, but it's decision to go from 0 funded positions to 13 (all in the long term full time bar required/jd advantage category, curiously *ahem*) is striking considering that their graduating class for 2014 was only 93, so from 0% to 14% funded (13 / 93 = .139). And it's no secret that UC Irvine throws the deep ball when it comes to it's U.S. News Ranking. Ugh.