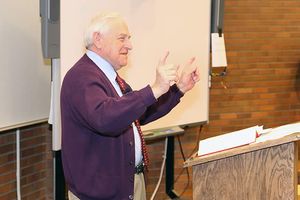 Born in Poland, Gabinet moved with his family to Chicago as a boy. After serving in the U.S. Navy during World War II, he received his bachelor's and law degrees from the University of Chicago, where he was an editor of the law review. His law school classmates included Robert Bork (who became a leading scholar of antitrust law but, we hear, used Gabinet's outline to get through their law school Antitrust course) and Marvin Chirelstein (another prominent tax professor). Between college and law school, Gabinet spent two years in medical school. Along the way he also found time to play Junior A hockey, where his defense partner was future Hall of Famer Harry Howell. Although he returned to school to complete his education, Gabinet continued to play recreational hockey for many years (including games with and against some of his students). ...

Although Gabinet will be retiring, he intends to continue teaching one course annually. In fact, at the age of 87, he has decided to take up a new one, Insurance Law, which we have not been able to offer since Professor Wilbur Leatherberry ADL '65, LAW '68 retired two years ago