The Economist: Lawyers Beware: The Accountants Are Coming After Your Business

The Economist, Attack of the Bean-counters. Lawyers Beware: The Accountants Are Coming After Your Business:

Consulting has its Big Three; accounting the Big Four; and executive search a Big Five. But there is no corresponding clutch of dominant law firms. None has amassed as much as 0.5% of an industry with global revenues of around $650 billion a year. Even the biggest law firms may be anachronistically inefficient. They are run by lawyers, not professional managers, insist on charging by the “billable hour” rather than by results and use little technology more advanced than e-mail. Nonetheless, most big law firms have continued to be highly profitable.

In recent years, clients have begun to rebel against the billable hour, and at being charged senior lawyers’ rates for work done by juniors. Some have started sending basic legal paperwork to cheap, offshore processing centres. But only now is a serious threat to the law firms’ cosy existence emerging.

It comes from none other than the Big Four accounting networks (Deloitte, EY, KPMG and PwC), whose combined annual revenues of $120 billion exceed the $89 billion generated by the 100 largest law firms combined (see charts). 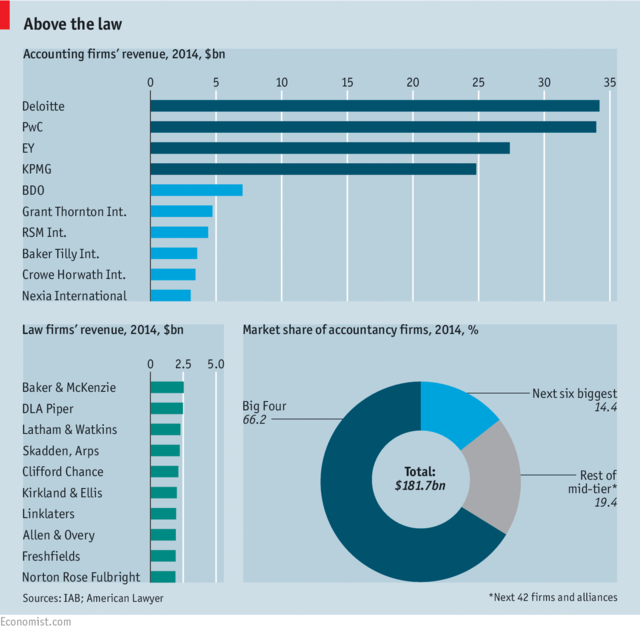 Having already dipped a toe into the legal business a couple of decades ago, only to retreat, the accountants have been stealthily building up legal-services divisions. These have now reached a size where they outgun most law firms: by headcount, PwC’s legal arm is the world’s tenth-biggest, and all four networks’ law divisions are in the top 40 by this measure.

The accountants insist that they do not want to compete with law firms, and that legal services will remain a small chunk of their revenues in the medium term. So far, they have focused on mid-tier, process-oriented work rather than the big deals and lawsuits that elite law firms chase. Moreover, regulation has restricted their growth: they cannot practise law in America, which accounts for over a third of global legal spending, and most European countries restrict their freedom to do so. Only a few countries allow full integration of accounting and law firms. ...

Nonetheless, as the accountants run out of room to grow in other businesses, they will have trouble resisting this inefficient and lucrative market. And the law firms will find it hard to fend them off.

Yikes, here's yet another heretical article about encroaching competition upon and structural change in the legal profession that are not supposed to occur now or at any point ever in the future ever. What does The Economist know about economics, anyhow?

The Big 4 have not-so-quietly been positioning themselves to snatch business away from law firms once any sort of deregulation occurs. Unlike law firms that like to populate themselves with cookie-cutter attorneys, Big4 has been gathering folks of all stripes and abilities to provide a whole host of services to businesses. They have been eating away at the edges for years. Law firms are too constrained by the rules of the profession to effectively compete. Too many law firms are insistent on billing now and generating what cash they can, with little regard for building a sustainable future model.

I'd love to see an accountant argue in front of a jury. Let's just say I'm not losing sleep.

"I'd love to see an accountant argue in front of a jury. Let's just say I'm not losing sleep."

Lawyers know Latin terms like "non sequitur," or should. Or is the commenter's argument that all work having to do with legal matters is trial work?

And can't an accounting firm hire a trial lawyer?

I am a retired CPA and former chief tax officer of two different US-based corporations. My view, and that of many of my peers, is that the major law firms delivered much more value on specific technical projects than the Big Four accounting firms. The accounting firms tended to throw too many bodies on a project. Although the law firms may bill at a higher hourly rate they are, in my opinion, generally much more focused and efficient.

That's been my experience as well. Big 4 are extremely bureaucratic and inefficient.