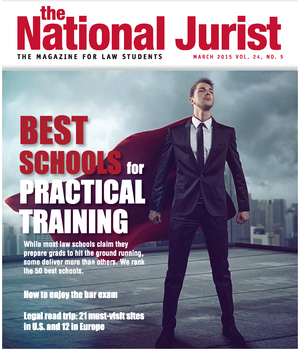 The ABA now releases ample data on how many students participate in clinics, externiships and simulation courses. The National Jurist used this data to measure which law schools are delivering when it comes to practical training.

As we did last year, we looked at the percentage of full-time students in clinics, externships, and simulation courses. This year, we also looked at student participation in interscholastic skills competitions, such as moot court tournaments.

We again placed the most weight on clinical experience, at 30 percent. ... Externships -- at 25 percent -- were given second highest weight. ... Simulations accounted for 20 percent. ... School competitions were given a weight of 5 percent. We then asked schools to provide additional information about their additional offerings that are not reflected in these numbers, and this accounted for the final 20 percent. For example, schools requiring pro bono work were awarded points for those efforts.

[M]ore schools are earning top grades, as 86 schools received a B or higher. 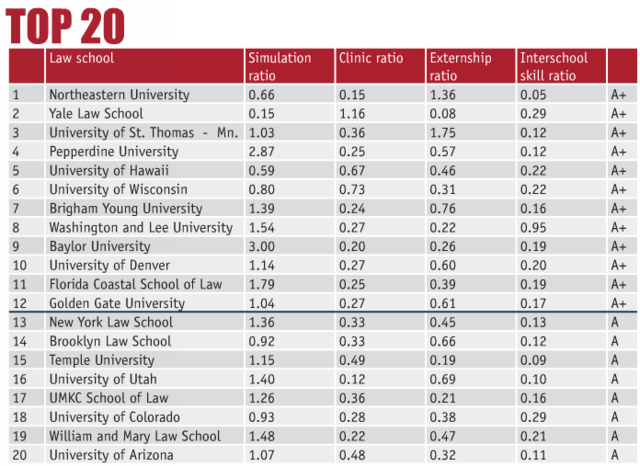 Even if change is happening at a faster clip than how law schools traditionally move, it's still not happening overnight. Only between 36 percent and 40 percent of law students have participated ina  clinic in their three years of law school. ... The ABA now requires that students take at least six credits of experiential training, but that only amounts to about 7 percent of the curriculum. ...

There are detractors regarding this surge in experiential training. Some wonder why there hasn't been more discussion on its worthiness. University of Maryland Francis King Carey School of Law professor Robert Condlin wrote a recent paper titled Practice Ready Graduates: A Millenialist Fantasy, which was critical of the concept. In it, he attacks practical training on several levels. For one, the legal market has shifted and jobs aren't as plentiful. So it hardly matters if students are practice ready. "Law schools cannot revive the labor market, or improve the employment prospects of their graduates, by providing a different type of education," he wrote.

When you were a BigLaw hiring partner on the East Coast, how many times did you interview students from top-ranked (on this list) Northeastern, NYLS, Brooklyn, Temple, & Florida Coastal versus students from Harvard, Yale, Columbia, NYU, Penn, Georgetown, BC, BU, and GW? And in hiring? And to make junior partner?

As I said, prestige above all else.

Has this person actually been to Yale?

...And yet the Northeastern co-ops do not necessarily impart any legal skills (they are of wildly varying quality and there is virtually no school oversight of employers, making abuse of the system fairly rife), only 43 to 45% of the last three years' graduating classes landed FT, LT, license-required jobs at any salary, and the entering class is now almost 50% smaller than it was a few years ago. Legal employers hire because of prestige, not on purported practical training.

The National Jurist, as usual, measures inputs, not results. For example, Yale has many strengths, but "best practical training" is not one of them. Notwithstanding the quality of its students, it scores relatively poorly on associate placement and partners in big firms. When asked about how well their law school prepared them for practice, its grads do not give it the highest marks. We hire new law professors all the time out of Yale. But when I was an East Coast big-firm hiring partner, we rarely looked to Yale for practical talent. Applicants should take the National Jurist's methodology with a grain of salt.

Remind me, what's the employment rate for recent Northeastern grads?