Piketty and Others on Capital in the Twenty-First Century 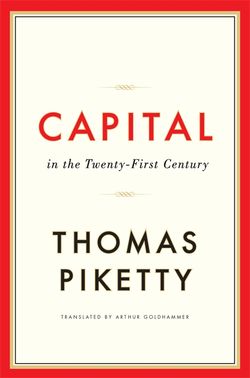 In this article, I present three key facts about inequality in the long run emerging from this research ... and seek to sharpen and refocus the discussion about those trends. In particular, I clarify the role played by r > g in my analysis of wealth inequality. I also discuss some of the implications for optimal taxation, and the relation between capital-income ratios and capital shares.

I. What r > g Can and Cannot Explain
[T]he way in which I perceive the relationship between r > g and inequality is often not well captured in the discussion that has surrounded my book. For example, I do not view r > g as the only or even the primary tool for considering changes in income and wealth in the twentieth century, or for forecasting the path of inequality in the twenty-first century. Institutional changes and political shocks— which to a large extent can be viewed as endogenous to the inequality and development process itself—played a major role in the past, and it will probably be the same in the future. In addition, I certainly do not believe that r > g is a useful tool for the discussion of rising inequality of labor income: other mechanisms and policies are much more relevant here, e.g., supply and demand of skills and education. 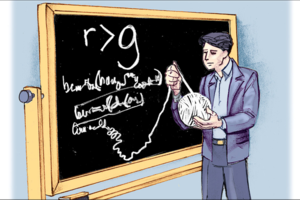 The book’s central proposition, that inequality in capitalist societies will inevitably grow, can be summed up with a simple equation: r>g. That is, the return on capital (r) outpaces the growth rate of the economy (g) over time, leading inexorably to the dominance of inherited wealth. Progressives such as Princeton economist Paul Krugman seized on Mr. Piketty’s thesis to justify policies they have long wanted—namely, very high taxes on the wealthy.

Now in an extraordinary about-face, Mr. Piketty has backtracked, undermining the policy prescriptions many have based on his conclusions. In About Capital in the Twenty-First Century, slated for May publication in the American Economic Review but already available online, Mr. Piketty writes that far too much has been read into his thesis.

Though his formula helps explain extreme and persistent wealth inequality before World War I, Mr. Piketty maintains, it doesn’t say much about the past 100 years. “I do not view r>g as the only or even the primary tool for considering changes in income and wealth in the 20th century,” he writes, “or for forecasting the path of inequality in the 21st century.”

Instead, Mr. Piketty argues in his new paper that political shocks, institutional changes and economic development played a major role in inequality in the past and will likely do so in the future.

When he narrows his focus to what he calls “labor income inequality”—the difference in compensation between front-line workers and CEOs—Mr. Piketty consigns his famous formula to irrelevance. “In addition, I certainly do not believe that r>g is a useful tool for the discussion of rising inequality of labor income: other mechanisms and policies are much more relevant here, e.g. supply and demand of skills and education.” He correctly distinguishes between income and wealth, and he takes a long historic perspective: “Wealth inequality is currently much less extreme than a century ago.”

A year after the English-language edition of “Capital in the Twenty-First Century” dominated American bestseller lists, Thomas Piketty is trying to cover his retreat with an article aimed at academic economists who have largely rejected the book. In the new article, Mr. Piketty tries to guide people toward his tome’s stronger points and away from its weaknesses, which include his cavalier use and abuse of data. ...

“Capital in the Twenty-First Century” contained a lot of 19th- and 20th-century history, which Mr. Piketty now says was his primary topic. But the book also made strong claims about the future. If Mr. Piketty had wanted readers to take his predictions and policy recommendations less seriously, perhaps his book title should not have included the words “Twenty-First Century.”