More people took the Law School Admission Test in February than during the same month last year—4.4 percent more, to be exact. That represented the single largest increase in test takers since December 2009 and followed a nearly 1 percent boost in the number of December test takers.

But people who track admission trends warned not to read too much into those numbers. Traditionally, fewer candidates sit for the test during February, and the increase represents just 859 additional test takers nationally. Moreover, the total number of test takers during the 2014-15 cycle was down by nearly 4,000—3.6 percent—according to the Law School Admission Council, which administers the test. The total number of test takers has declined in each of the past five years.

“I don’t suspect that this recent increase will indicate that we’re going to have a turnaround of any sort,” said Steve Schwartz, a tutor who blogs about the exam. “I think it represents that we’ve kind of reached the bottom or that we’re somewhere in that neighborhood.”

Alfred Brophy, a professor at the University of North Carolina School of Law who closely follows admissions, noted that the number of law school applicants was down 4.6 percent at this point in the admissions cycle. He predicted applicants for the entire cycle would be down by about 5 percent. “I’m not hearing people [within the legal academy] saying, ‘Oh, things are turning around.’ Which is what I heard last year when the number of February LSAT takers was up slightly,” he said. “I think we’ll see another year of declines after this. I think fall 2016 may be the low point.” ... 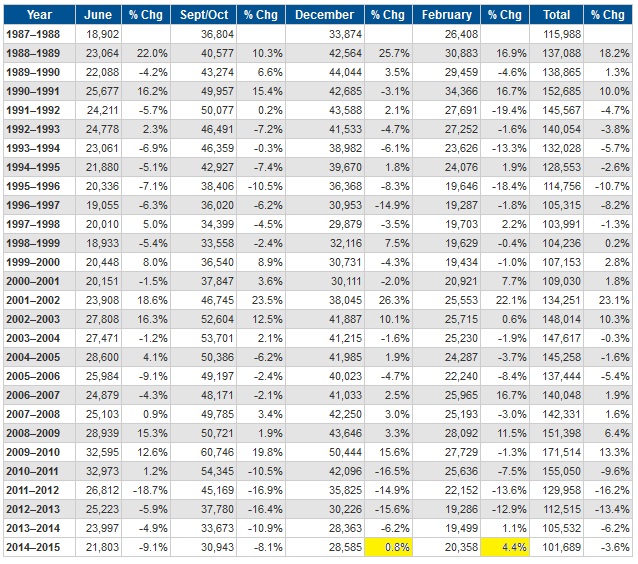